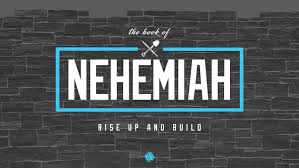 By Nehemiah, a leader with great vision

In the fifth century B.C., the Jews are continuing to emerge from their exile in the Persian Empire.

Invaded in 605 B.C. and 597 B.C., and then conquered in 586 B.C. when the Babylonians destroyed Jerusalem, the people of God are scattered throughout the Babylonian Empire and eventually witness the Babylonians’ own fall to Persia.

Now that they are living under a new regime that is accepting of God’s people and willing to let them return home to rebuild their nation, God raises up a series of leaders to take charge of that home going.

Two of these are Ezra the priest and Nehemiah the governor of Judah.

The story of these two dynamic leaders and the rebuilding in Jerusalem stretches across two books in the Christian Bible, but the books of Ezra and Nehemiah are originally one volume.

It is not advisable to read one without the other because together they provide a full account of God’s restoration of Jerusalem.

After the temple is rebuilt and dedicated in 515 B.C., Ezra returns to Jerusalem in 458 B.C. and restores God’s law as the foundation to the new Jewish community.

Nehemiah comes along a few years later and is responsible for fortifying the holy city, managing foreign affairs, and rebuilding the population.

Together they build a new society that grows and changes into the precursor to the modern Jewish faith.

At the heart of the Book of Nehemiah is a memoir, written by Nehemiah himself and preserved and edited by later Jewish scribes. His story picks up in 445 B.C., when he is a trusted advisor to Artaxerxes I.

When he learns that his countrymen are in trouble and that Jerusalem’s walls and gates are still in ruins, Nehemiah gains permission to return to Jerusalem and fortify it.

In only 12 years, he completes most of his work revitalizing Jerusalem (with the repair work on the Jerusalem walls taking only 52 days), giving as much of his own time and more of his own resources than he requires from anyone else.

With the holy city secure, the people come together to celebrate and renew their commitment to God and His call on their lives. Nehemiah’s story proves that energy, intelligence, unselfishness, and above all, trust are essential to living faithfully in covenant with God.

Nehemiah’s job is to taste the king’s wine and food, checking for poison. Because of these duties, Nehemiah is constantly needed, so he must seek God’s favor so that Artaxerxes I, will allow him to travel to Jerusalem.

Based on the etymology of their names, Sanballat’s family is probably one of those relocated families who adopted the worship of the Eternal once they moved to Samaria.

Now, almost 300 years later, Sanballat is the first of his family appointed governor of Samaria under the Persians. Following 15 years of political unrest, he has managed to form a loose federation of Persian provinces in the area that includes Jerusalem.

Tobiah is a Persian official who has taken care of Jerusalem until a new governor arrived.

Now that Nehemiah has arrived, Sanballat’s power over Jerusalem is uncertain. Nehemiah has not agreed to be part of his federation, so Jerusalem could become a threat to it.

Instead of repairing the old, these people build entirely new sections of wall inside the former wall’s perimeter, because reterracing the steep incline and clearing the rubble would be far too time consuming.

It is hard to imagine the intense pressures and various points of opposition that Nehemiah has to deal with.

First, he has an internal struggle with those Judeans who have married foreign wives — Babylonian, Edomite, Ammonite, Moabite, Samaritan — and have adopted their religious and cultural behaviors that are quite distinct from what is laid forth for Israel in the law of Moses.

Further, Nehemiah has an external struggle with individuals like Sanballat the Moabite, Tobiah the Ammonite, and Geshem the Arab who are violently opposed to the restoration of Jerusalem and her people.

These are ancient political, social, and religious enemies to the Jews, and they will stop at nothing to halt Nehemiah’s rebuilding efforts.

Nehemiah is the picture of a benevolent ruler. As a Persian-appointed official, he has the right to exact a sizable tax on the people of Jerusalem. Previous governors have had special jars made for collecting grain and oil and fruit from the people. This food went to support the governor and all of his formal dinners.

But Nehemiah does not exact this special tax because he realizes his people are already burdened by the Persians’ heavy taxes. As Artaxerxes’ cupbearer, certainly Nehemiah is a wealthy man; therefore he has no need for additional resources from Jerusalem’s people.

On his own, Nehemiah is able to regularly host all 150 of Jerusalem’s officials and frequent diplomats from other provinces, and the abundant meat and wine served at those functions proves that Nehemiah spares no personal expense.

Much like the Urim and Thummim, the exact identity of this book of the law ( 8:3) cannot be positively known. Most assume this law is some form of the Pentateuch, the first 5 books of the Old Testament.

Those books are the foundational principles for the Jews’ proper worship of God, containing some 613 specific laws, so it is likely the text (or at the very least the knowledge) of the Pentateuch would have survived the exile because of its importance.

Priests would have cared for it and not let the laws be completely forgotten among their people. Because of their separation from Jerusalem and the destruction of the temple, proper worship of God has been impossible during the exile.

After 100 years in foreign lands, the layperson may have remembered to observe the major laws such as “Do not murder,” but the details of festivals and Sabbath observance are surely forgotten.

So, many years later, it only takes half a day of reading to remind the Jews of their covenant with God and reinvigorate them to serve Him.

Not much is known about these ancient divination devices called Urim and Thummim. They are first mentioned in Exodus as 28:30 when God is giving Moses instructions on the clothing for the high priest.

These tools were to be carried in the breast piece of judgment, and presumably were only used by the high priest. Suggestions as to their form and function come from the discovery of similar devices in other cultures of the ancient Near East.

They may have been flat stones painted different colors, metal objects engraved with symbols, large dice, small sticks, or anything else imaginable. However they may have relayed God’s will, they were clearly effective tools used to discover God’s will in political situations.

So moved by the instructions Ezra reads in the book of the law, the Jews cannot help but respond to them.

After honoring God with a lavish feast — the Festival of Booths — acknowledging His role in liberating the Hebrews from Egypt and the Jews from Persia, everyone confesses God’s greatness and their own people’s shortcomings.

Ezra has reminded them that God is fair; He gives them the law to warn them of and protect them from His judgments. And even when they break that law, He is unendingly merciful and faithful.

God always remembers His people, rescues them, and begins fresh relationships with them. It is no wonder that everyone is so eager and joyous to sign a renewed covenant with Him.

Two very important characteristics of Jewish belief and behavior that set them apart from other peoples are endogamy and Sabbath: The Jewish people can only marry within and among their various tribes.

After the exile the choices are limited to the tribes of Judah and Benjamin, but there is still opportunity for marriage and family. However, the Jews are forbidden to practice exogamy, which is marriage outside their ethnic group.

The Eternal does not want the ideas and activities of other nations to influence His special people. Second, as with many of God’s instructions to Israel, the Sabbath observance reflects God’s activities in “creation week” in Genesis 1–2.

The Sabbath or seventh-day rest is unique in the ancient world; and it signifies that Israel’s Eternal One is over all aspects of creation, work, play, and rest. Nehemiah understands this, and he is direct in his instructions to this new Judean community.