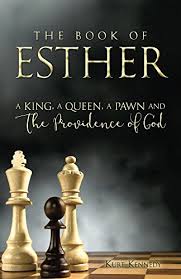 By an unknown Jew living in Persia

Pretty Hadassah, evil Haman, and wise Mordecai meet and match wits in a royal drama amid feasting in the winter palace of the Persian king Ahasuerus (Xerxes I) in Susa. (Persia occupied the region of modern Iran).

Following a series of plot reversals, Esther and Mordecai succeed in gaining the Persian king’s favor, and the king himself vanquishes their enemy Haman.

Changing The Course Of History

The Jews, ever the outsiders as they seek to establish and maintain a permanent earthly home, provide a study of contrasts with the antagonists. They counter the often-drunken feasting with fasts before they take action.

Against abusive power, they show courage and apply cleverness. The Persian men fear the independence of women and thus depose Vashti, but it is the boldness of her successor, Esther, that changes the course of history.

High Position In A Foreign Palace

Esther’s story evokes the recurring biblical theme of a promised remnant. Earlier, Joseph’s service to the Egyptian pharaoh allowed him to secure his family’s well-being and lineage during a deadly famine.

He told his brothers how God had put him in his position to preserve their family (Genesis 45:7). In a similar reversal, the Jews in Persia are able to defeat their tormentors because Esther also attains a high position in a foreign palace.

Although a remnant of Jews has already returned to Jerusalem, the remnant in Persia is still struggling to preserve their heritage.

This event is the origin of the Feast of Purim (named after the pur, which is a “lot” or object used to make decisions). Jews still observe Purim annually to remember God’s deliverance on the day decided by lot to be their day of destruction.

During Purim, children especially enjoy wearing masks and costumes to enact an important aspect of Esther’s story: because the Jews were highly assimilated into Persian society, mistaken identity played a role in their survival.

The Hand Of GOD

God is not explicitly mentioned in the Book of Esther, but it is His work through Esther and Mordecai that saves the Jews. The reader senses the hand of God, as evil is thwarted, goodness is rewarded, and the Jews are once again saved from their enemies.

The human role in the salvation drama is highlighted in Mordecai’s famous challenge to Esther to risk her life for her people: “And who knows? Perhaps you have been made queen for such a time as this” (4:14).

Kings in general, and Persian kings in particular, enjoy throwing lavish feasts and banquets for honored guests. It is their best opportunity to show off their wealth and power.

Occasions like this are useful for impressing and intimidating foreign agents, making treaties and deals, maintaining the illusion of greatness, making the powerless feel especially helpless, and even bullying would-be troublemakers.

It is during these occasions that much of the business of ruling is accomplished. But only men are allowed at this party.

The bad blood between the families of Benjamin and Agag goes back a long way to the time when Saul, a Benjaminite, destroyed the Amalekites and took their king, Agag, as his captive (1 Samuel 15:7–9).

Now the tables are turned, and Agag’s descendant exercises nearly supreme power over Mordecai and the other subjects of Persian power.

But, true to his Jewish teaching, Mordecai bows to no man nor pays him homage. That honor is reserved for God and Him alone.

Of all the books in the Bible, Esther is unique because God is never once mentioned explicitly. Still, for those who know God and who know history, God is in the story, behind it, above it, beneath it.

He is the main actor in history, even if He is not acknowledged. Here, Mordecai shows great wisdom. The Jews, God’s chosen people, will be delivered whether Esther involves herself or not.

The Persians have a particularly grisly way of humiliating and killing those they hate. A tree is cut down and sharpened to a point at one end. In some cases, the condemned are killed, and their lifeless bodies are impaled on it.

Others are hung on the pole as a mode of torture and execution. It is erected in some public place as an example for others, and the 75-foot pole described here is high enough to be seen over most buildings and small trees.

Soon birds and insects begin eating away at the dead or dying. Political enemies, criminals, and dissidents often end their lives this way.

The threat of public death and humiliation has kept many from disobeying the law, but not Mordecai.

Although Haman is dead, the order to kill all the Jews in the Persian Empire is very much alive. Once the king has signed an order, it cannot be reversed. Such kings never reverse themselves; it is too risky.

So a new order must be written and sent to the far reaches of the empire; and Mordecai, the Jew, is just the person to do it.

Now that he has been elevated to the supreme position where he has use of the king’s signet ring, he can exercise royal power.

According to custom and Persian law, the Jews have every right to seize the assets of those they kill in this battle. But it is important to note that they do not.

The reason for this odd behavior may well lie in history: Hundreds of years earlier, Saul and the Israelites defeated King Agag (the ancestor of Haman) and helped themselves to the plunder, violating God’s clear directive.

That violation brought them irreparable harm. So now, when they have the opportunity, the Jews leave the Agagites’ assets alone. Obedience deferred is still obedience.

In all of Jewish history, Esther’s story is unique. Her meteoric rise from common Jewish girl to queen of the vast Persian Empire is evidence that God can use some unlikely characters. In this case, He uses Esther to halt a terrible injustice and to settle an ancient score.

To be used by God in any capacity, however, requires courage; it requires taking a risk. In Esther’s case, she risks her own life in order to save her people, and in a greater sense to ensure that the story of redemption continues.

The world has always endured times of great injustice, times of great need. Yet God is at work, transforming sorrow to joy, shame to honor, and injustice to justice. Each person is called to impact the age in which he or she lives.