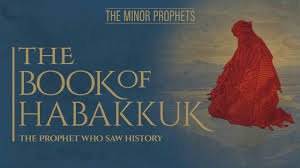 A crisis of faith in light of Judah’s impending destruction

The message of Habakkuk, a prophet

Habakkuk is a philosophical prophet, and his message is embedded in a dialogue he has with God over the impending destruction of Judah at the hands of a nation with a reputation for power, cruelty, and wickedness.

Habakkuk questions God for sitting by and doing nothing as injustice and violence run rampant. Even though God’s people cry out for help, the heavens seem strangely silent. Like Job, the prophet challenges God boldly and then awaits God’s response.

Ultimately God does respond, only to indicate that He will punish sin wherever it is found—even among His people—using whatever means He desires.

The prophet eventually accepts that God’s ways cannot be completely understood by His people, and he is encouraged to learn that God intends to destroy the wicked Chaldeans even as He pledges to restore Judah’s fortunes.

Habakkuk even acknowledges this in a prayer, a psalm-like hymn celebrating God’s descent to the earth to fight for His people against rival nations.

Answers to questions like these do not come easily. In fact, answers may never come. Regardless, Habakkuk soon trusts that God’s covenant people will not only survive, but they will thrive as they remain faithful to the Eternal One who comes to redeem and restore them (2:4; 3:17–19).

In some ways, the redemptive activity of the church addresses Habakkuk’s questions.

Ultimately, God will put an end to evil and all its manifestations; until then, the church has plenty to do.

When Habakkuk looks around him, it seems the good suffer and the wicked prosper. The Babylonian Empire is threatening to destroy Judah, the Egyptian armies have abandoned their treaty with Jerusalem, and within Judah some of God’s own people are abandoning Him for personal gain.

But when he asks God why the good suffer, God explains that in the long run, they don’t.

God is in control of all of creation, and only He can see how current circumstances fit into His greater plan. With that knowledge, Habakkuk now praises God for answering the prophet’s questions, for being in control, and for eventually vindicating His faithful followers.