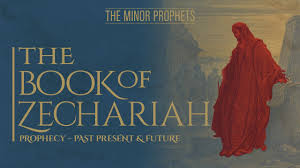 Visions and oracles of Jerusalem, her king, and her future

The message of Zechariah, a priest and prophet who returned from Babylon

Zechariah is both a priest and a prophet. He hears his first message from God in the early years after the Jews’ return from exile in Babylon around 520 B.C.

As a priest, he has a deep concern for the temple in Jerusalem that has lain in ruins since the Babylonian armies razed it nearly 70 years earlier. Along with Haggai, his contemporary, the prophet Zechariah calls for the completion of the new temple, the place of God’s presence on earth.

Also as a priest, Zechariah is desperate for sin and impurity to be removed from the covenant people. He wonders how a holy God can dwell in the heart of a city like Jerusalem, infected with so much wickedness.

As a prophet, Zechariah is God’s mouthpiece to a generation that has journeyed far from Him. Because of his special connection to God, Zechariah can look into the future and see a new day, a day when God’s anointed shepherd will arrive to rule and transform the world.

About The Name Zechariah

The name Zechariah means “the Lord remembers,” which would be a fitting title for this book even if it were not the prophet’s name as well.

He has not forgotten His covenant promises, of course, but the 70 years of exile have seemed like an eternity of silence. With the return from Babylon, Jerusalem has God’s attention once again, and He will go to work for His people righting wrongs, establishing justice, and fulfilling His promises.

Although the message of Zechariah bears certain similarities to earlier prophecies, he is an apocalyptic prophet, so the vehicles of his prophecy are reports of visions, questions, and interpretations offered by God’s heavenly messengers.

The term apocalypse literally means “an unveiling.” In his night visions, Zechariah sees a reality that is hidden to most, a reality that will soon invade history from above.

For him the ultimate hope for a complete restoration of God’s people comes not from earth below but from God’s actions above.

There are many other important themes in Zechariah’s prophecy:

the restoration of David’s royal family in Zerubbabel and his power-sharing with the high priest Joshua;

the universal adoration of the Eternal God in Jerusalem, the destroyed city that will one day be recognized as the center of the world;

and, perhaps most memorably, all those passages that will be interpreted as foreshadowing the coming of the Anointed One.

Echoes of Zechariah’s prophecies resonate throughout the Gospels and also in the Book of Revelation, making him one of the most quoted prophets and priests by New Testament writers.

Zechariah has a series of eight visions one night in early 519 B.C. These visions are filled with symbols, numbers, unusual sights, and distinct sounds.

In order to understand what he is seeing, God sends a heavenly messenger to serve as Zechariah’s guide and interpreter. All the visions relate to some aspect of the restoration of Jerusalem and her people.

In this vision Zechariah sees a heavenly court. Joshua the high priest is on trial, charged with impurity and accused of being unfit to serve as high priest.

The Accuser appears in the role of a prosecuting attorney, bringing charges and attempting to undermine the credibility of the one person God wants to lead His people. But the Judge will have none of it.

When Nebuchadnezzar destroys Jerusalem in 586 B.C., he carries her chief citizens off into exile in Babylon. Thousands don’t survive the brutal journey.

Those who do must start their lives over in a hostile land where they are subjects of violence, slavery, and every manner of wickedness.

That’s why Babylon becomes synonymous with evil. In this vision, the wickedness of Judah is contained and sent far away to Babylon, where it is not only tolerated but is worshiped. Civilization reaches its nadir when wickedness is worshiped.

“Branch” is a prophetic title for the Anointed One, that royal descendant of David whom God will send to usher in a new age of justice, peace, and joy.

In Zechariah’s day, the people wonder if Zerubbabel is that king. Ac cording to the prophet, God has designs on him as the one to rebuild the temple and occupy the throne, but he is not destined to reign alone as the Anointed One will.

Zerubbabel reigns with Joshua, the high priest. Together they are anointed, acclaimed, and crowned leaders to watch over God’s people.

Ultimately, God’s purpose is redeeming His fallen creation. He initiated His plan of redemption by calling and equipping the children of Abraham to be a light to the nations.

Zechariah foresees a day when Jerusalem is the center of the world; when people of every race, creed, and color journey to it; and when the Jews show the rest of the world the way to the one True God.

After chapter 8, the Book of Zechariah changes — its tone, its character, its focus.

It is possible that these last chapters were not written by Zechariah, and the debate about who wrote them and when they were written has raged since Jesus died.

In 27:9-10 of his Gospel, Matthew identifies the author as Jeremiah, a forerunner of Zechariah. More recent scholarship has further confused the matter because the setting in chapter 9 could describe any time in Jerusalem between Hezekiah’s rule before the exile and the Maccabean revolts 400 years later.

This inability to positively identify the author and the audience, along with the lack of historical, contextual markers in the text itself, make these words universally applicable. They may even describe the end time when God judges the nations.

Like many earlier prophets, Zechariah tells of a day when an ideal King will enter Jerusalem to the uproarious shouts and jubilant celebration of the people.

Unlike other kings, this King enters humbly riding on a donkey, a beast of burden, not on a warhorse. He comes to establish real justice.

God has given Him the victory, and now He shares that victory with the people. In that day, as His reign reaches the ends of the earth, war and the instruments of war are laid aside in the greater interests of an abiding, universal peace.

The day of the Eternal One is coming. It is a day of judgment when a great final battle is fought. Jerusalem and her people are under attack; and the city, it seems, falls to her enemies.

But ultimately, God’s people do not fight alone. The Lord comes — commanding the army of heaven — to rescue and defend His people.

Ultimately, He is crowned King over all the earth. In that day, Jerusalem is transformed and reinstated as God’s holy city; it becomes the center of the world, the source of life-giving waters. Even her enemies make pilgrimages to Jerusalem to worship and adore the one True God.