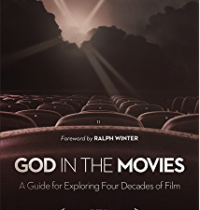 This informative guide helps readers combine their love of movies with their desire to grow closer to God. Foremost experts on faith and film, all connected with the Reel Spirituality Institute at Fuller Seminary, explore forty leading movies from the last four decades to encourage movie lovers and small groups to reflect critically and theologically on their film choices. God in the Movies introduces and analyzes the spiritual content of top films from the 1980s through the 2010s, opening viewers up to a conversation about life, faith, and God.

In an alternate 2057, violence in the U.S. is an all consuming cancer. Peter, Rose, and Alisha want to escape with their lives. And their secrets.

But killers hunt them and their flight lands them in the middle of an international nuclear conspiracy. Faced with present horrors and chased by past nightmares, they must come to grips with what they have done. They must fight off demons within and without to survive Crossing The Border.

The complete 3-book historical Christian fiction series by the New York Times bestselling author of Redeeming Love and The Masterpiece.

Travel to first-century Rome in this classic series and discover what has inspired millions of readers worldwide. The three books in the Mark of the Lion series are packaged in a giftable boxed set.

A Voice in the Wind, the first book in the trilogy, introduces readers to Hadassah, a young Jewish girl captured and sold into slavery but still holding firm to her faith in God. Though torn by her love for a handsome aristocrat, Hadassah becomes a shining beacon of light in the darkness and depravity around her.

In An Echo in the Darkness, Marcus, a wealthy Roman aristocrat touched by Hadassah’s sincere belief, begins to wonder if there’s more to this life. As he continues to search for meaning and faith, he is led by a whispering voice from the past that could set him free from the darkness of his soul.

The trilogy concludes with As Sure as the Dawn, which follows Atretes, the high chief of a Germanic tribe who fought as a gladiator and won his freedom. As Atretes sets out to return home with his infant son, only one thing stands in his way: Rizpah, a Christian widow who has cared for the baby since his birth.

All three books in this latest Collection include a preface from Francine Rivers and discussion questions suitable for personal and group use.

After serving for more than thirty years as a parish minister, the author was hospitalized with major depression. This is the story of his depression and recovery–a recovery of health, vocation, and faith. First, Griggs regained the experience of small pleasures. Eventually, he recovered the ability to choose, to set limits, and to accept reality. He then turned to the biblical Psalms–indeed his own writing echoes their candor. But he also found hope in films, including Breakfast at Tiffany’s and Blazing Saddles. To the mental health issues facing clergy and others in the helping professions Griggs brings to bear insights from research and from his own experience as a pastor and a person recovering from depression. He tells his story with spirit and humor.

Thank You for stopping by, please leave All comments in the comments box below ⇓