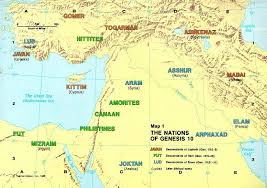 Origin of the Nations of the World

This is a chapter of genealogies, of families, which are the origin of the nations of the world. This chapter is far more important than the space I’m giving to it would indicate. If you are interested in ethnology and anthropology and the story of mankind on the earth, you may want a far deeper study than you will find here.

H. S. Miller, who has his master’s degree in ethnology, has charted the origin of the nations, using Genesis 10 as a basis for the threefold division of the human family, which is revealed in these three sons of Noah: Ham, Shem, and Japheth. Ethnology makes it evident, by the way, that neither the sons of Japheth nor the sons of Ham ever comprised what some folks call the lost ten tribes of Israel.

Here in chapter 10 we have the genealogies of all three sons of Noah.

Now these are the generations of the sons of Noah, Shem, Ham, and Japheth: and unto them were sons born after the flood.

The sons of Japheth; Gomer, and Magog, and Madai, and Javan, and Tubal, and Meshech, and Tiras.

And the sons of Gomer; Ashkenaz, and Riphath, and Togarmah.

And the sons of Javan; Elishah, and Tarshish, Kittim, and Dodanim.

By these were the isles of the Gentiles divided in their lands; every one after his tongue, after their families, in their nations.

And the sons of Ham; Cush, and Mizraim, and Phut, and Canaan.

And Cush begat Nimrod: he began to be a mighty one in the earth.

And the beginning of his kingdom was Babel, and Erech, and Accad, and Calneh, in the land of Shinar.

Out of that land went forth Asshur, and builded Nineveh, and the city Rehoboth, and Calah,

And Resen between Nineveh and Calah: the same is a great city.

And Canaan begat Sidon his firstborn, and Heth,

And the Arvadite, and the Zemarite, and the Hamathite: and afterward were the families of the Canaanites spread abroad.

And the border of the Canaanites was from Sidon, as thou comest to Gerar, unto Gaza; as thou goest, unto Sodom, and Gomorrah, and Admah, and Zeboim, even unto Lasha.

Unto Shem also, the father of all the children of Eber, the brother of Japheth the elder, even to him were children born.

The children of Shem; Elam, and Asshur, and Arphaxad, and Lud, and Aram.

And the children of Aram; Uz, and Hul, and Gether, and Mash.

And unto Eber were born two sons: the name of one was Peleg; for in his days was the earth divided; and his brother’s name was Joktan.

And Joktan begat Almodad, and Sheleph, and Hazarmaveth, and Jerah,

And Hadoram, and Uzal, and Diklah,

And Obal, and Abimael, and Sheba,

And Ophir, and Havilah, and Jobab: all these were the sons of Joktan.

And their dwelling was from Mesha, as thou goest unto Sephar a mount of the east.

These are the families of the sons of Noah, after their generations, in their nations: and by these were the nations divided in the earth after the flood.

I want to submit to you that this is one of the great chapters of the Bible although we have given very little space to it. You can see what a rich study this would make for anyone who really wanted a fair appraisal of the human family. A great many have used this remarkable chapter for that purpose.