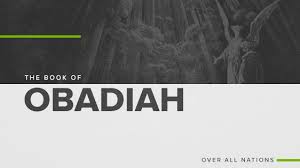 God’s judgment on Edom for its cruelty

The message of Obadiah, a servant of God

The Book of Obadiah is the shortest in the Old Testament, and not much is known about its author. Obadiah, which means “one who serves the Lord,” may be either a title or a proper name.

Traditionally the author is identified as the servant to King Ahab in the ninth century B.C. (1 Kings 18:3), but the content and style of the book suggest this Obadiah is another prophet who lived after the fall of Jerusalem in 586 B.C.

The date of the work cannot help solve the mystery as there are not enough details within the prophecy to date it precisely.

Regardless of his identity, the prophet who speaks this message has a fierce love for the people of Jacob—especially Judah and Jerusalem—and is the human vehicle for God’s voice to the nations.

A Score Settled By GOD

It explains how the Babylonian crisis has reopened the deep wound of an ancient family feud.

Instead of rushing to Judah’s aid when Jerusalem was attacked and destroyed, Esau’s descendants took advantage of the moment and profited by Judah’s suffering.

Although the descendants of Jacob and Esau formed separate nations hundreds of years before this prophecy is delivered, God remembers the tradition of enmity between these “brothers” and chooses to punish the broken loyalty.

Ultimately, Obadiah says, God will humble the proud people of Edom, restore the fortunes of Israel, and cause Israel to once again possess the land of promise.

The day of the Eternal is near and coming close. On that day, God will settle every score, right every wrong, and bring justice to an unjust world.

Edom itself is destined to be ruled by Jacob’s sons and daughters as the kingdoms of this world give way to the kingdom of the Eternal God.

Imagine the scene: The Edomites have come with other nations to rob and betray Israel; it looks as though God has allowed Israel’s cousins, the descendants of Isaac through Esau, to steal from His temple and holy city.

The Israelites are convinced they have kept Abraham’s covenant with God while the Edomites have forsaken the Lord and His people Israel.

Their prayer is for God to provide refuge for those who seek and trust in Him, and to judge their enemies.