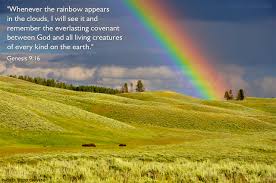 Now we come to a new beginning. It is difficult for us to realize what a revolutionary beginning it is. The dispensation of human conscience is over, and God is putting man under government—he is to govern himself. We will see something of this in the covenant which God made with Noah. And let’s keep in mind that, when God made the covenant with Noah, He made it with you and me, for He made it with all mankind.

And God blessed Noah and his sons, and said unto them, Be fruitful, and multiply, and replenish the earth.

Every moving thing that liveth shall be meat for you; even as the green herb have I given you all things.

But flesh with the life thereof, which is the blood thereof, shall ye not eat.

Whoso sheddeth man’s blood, by man shall his blood be shed: for in the image of God made he man.

And God spake unto Noah, and to his sons with him, saying,

And I, behold, I establish my covenant with you, and with your seed after you;

And God said, This is the token of the covenant which I make between me and you and every living creature that is with you, for perpetual generations:

I do set my bow in the cloud, and it shall be for a token of a covenant between me and the earth.

And it shall come to pass, when I bring a cloud over the earth, that the bow shall be seen in the cloud:

A bow speaks terror, but this has neither string nor arrow; and a bow alone will do little hurt. It is a bow, but it is directed upward, not toward the earth; for the seals of the covenant were intended to comfort, not to terrify.

And I will remember my covenant, which is between me and you and every living creature of all flesh; and the waters shall no more become a flood to destroy all flesh.

And the bow shall be in the cloud; and I will look upon it, that I may remember the everlasting covenant between God and every living creature of all flesh that is upon the earth.

And God said unto Noah, This is the token of the covenant, which I have established between me and all flesh that is upon the earth.

THE SIN OF NOAH AND HIS SONS

We will find something that is very disappointing in the remainder of this chapter.

The question arises: When man came out of the ark after the Flood and all the sinners were dead, does that mean that there was no more sin on the earth?

And the sons of Noah, that went forth of the ark, were Shem, and Ham, and Japheth: and Ham is the father of Canaan.

These are the three sons of Noah: and of them was the whole earth overspread.

And Noah began to be an husbandman, and he planted a vineyard:

And he drank of the wine, and was drunken; and he was uncovered within his tent.

And Ham, the father of Canaan, saw the nakedness of his father, and told his two brethren without.

And Noah awoke from his wine, and knew what his younger son had done unto him.

And he said, Cursed be Canaan; a servant of servants shall he be unto his brethren.

And he said, Blessed be the LORD God of Shem; and Canaan shall be his servant.

God shall enlarge Japheth, and he shall dwell in the tents of Shem; and Canaan shall be his servant.

And Noah lived after the flood three hundred and fifty years.

And all the days of Noah were nine hundred and fifty years: and he died.