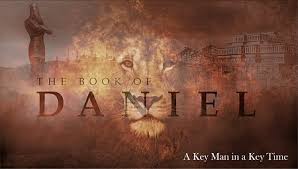 The story of Daniel, a wise man who found favor

The Book of Daniel has two sections: accounts of the life of Daniel, a gifted young Jew taken into exile (chapters 1–6), and reports of the visions of Daniel (chapters 7–12).

Throughout the book, Daniel—whose Hebrew name means “God is my judge”—models how Jews are to live when they are the minority group living among powerful pagan influences.

Resistance to assimilation is not futile; Daniel’s life demonstrates that those who are devoted to God not only survive but succeed despite their status.

As a story, the faithfulness of Daniel and his friends contrasts the foolishness of powerful emperors and idolaters. The courage these Jews exhibit is matched only by the wisdom and deliverance God grants them.

As an apocalypse, the Book of Daniel records visions that reveal what heaven has in store for earth. While Daniel is himself a gifted dream interpreter, he needs assistance unpacking the meaning of his night visions that coincide with the rise and fall of various empires in the Near East, including Babylon, Persia, and Greece.

Although rooted in historical events, Daniel’s visions provide an outlook that transcends history because the inexact setting allows the faithful of many generations to interpret these visions in light of their own lives.

Because the book relates a message of hope and rescue in a pain-filled world, it was studied widely by Jews throughout the ancient Near East.

The prophecies were particularly comforting for the Jews living in Jerusalem during the Maccabean Period, when the book was probably completed.

Like Daniel, these Jews experienced constant threats and persecution by powerful, cruel leaders such as the Syrian king, Antiochus IV.

The popularity of Daniel and these accounts is proven in various ways, in particular the discovery of many fragments of this text in the Near East and the writing of other books inspired by Daniel’s larger-than-life persona.

The Resurrection Of The Dead

The Book of Daniel makes various contributions to the New Testament and early Christians. It is the only Old Testament book to reference the resurrection of the dead.

Daniel and his companions ask for a diet consistent with God’s instructions to His covenant people: vegetables and grains, without the rich cuts of meat that are normally a staple of those who eat at the king’s table.

They also want to exclude any wines or mead because they intend to avoid any unnecessary entanglements with Babylonian culture. Most of those meats and wines have been offered to the Babylonian gods, and Daniel wants no part of that.

Daniel and his exiled friends may have to live in Babylon, but they don’t have to be absorbed into the culture. Every bite of every meal reminds them that they are different.

Daniel agrees with the counsel given to the king by his own advisors. No worldly source can possibly answer the king’s challenge. To know the content of the dream without any prior information is beyond anyone but the God of Israel.

The Babylonian Empire has a complex governmental structure. At the top is the king, a man descended from Nabopolassar, the Babylonian who wrested the region from Assyrian control about 612 B.C.

A resident of the Chaldean region of the Babylonian Empire, he brings his friends with him to the top, making the Chaldeans the most powerful group of people in the empire.

As the empire grows, the king needs friends under him to rule the far-flung provinces, so he appoints satraps, guardians of large portions of the empire and representatives of the king in his absence.

Within each large portion, prefects rule the conquered cities and report to the satraps. In every part of the empire, the power of the king is felt through his servants who administer justice, protect the lands from invasions, and collect hefty taxes.

Daniel’s friends are men of conviction. They are ready for anything the king throws at them and know that God can release them from the king’s angry grip. They just don’t know if He will.

That line — “But even if He does not” — resonates with faith. Everyone wants to follow a God who does miracles-on-demand.

But Shadrach, Meshach, and Abed-nego know the one True God does not always rescue His martyrs. Still they will not back down; they will not compromise. They will follow Him and not serve Nebuchadnezzar’s gods.

A theme found throughout Scripture is that God humbles the proud and exalts the humble.

Nebuchadnezzar is stronger than anyone else, and he knows it. He willingly accepts credit for all that has happened in his life, so God moves decisively to show how insignificant Nebuchadnezzar truly is.

It takes little to reduce him to an animal-like state, a wild man living at the margins of humanity, his power and prestige eroded overnight.

If one of the greatest kings in history degenerates so completely, what can be done to common folks? Seven years of living as an animal go by, however, and he comes to his senses. He recognizes the truth of who he is and who God is. That realization is his salvation.

The regent stands in for the king and performs his duties while King Nabonidus spends 10 years campaigning abroad, that is, fighting to expand the kingdom. In this case, the regent is Nabonidus’ son Belshazzar.

Belshazzar makes a promise he cannot keep. The night that he gives the order to reward Daniel for his service is his last night on earth.

By sunrise a new king — even a new empire — rules Belshazzar’s kingdom. But Daniel doesn’t mind because the true King is with him.

Darius, Belshazzar’s successor, will recognize Daniel’s obvious talents and one day promote him to the same rank Belshazzar promised.

Belshazzar’s story is a great reminder that people — regardless of their rank — who insult God or try to render God irrelevant are doomed to fall.

They may not fall as quickly as Belshazzar, but they will fall.

The beasts can be identified by a careful study of history. The lion, bear, leopard, and fourth terrifying beast represent Babylon, Media, Persia, and Greece.

Persia had four kings, so the leopard had four heads. The ten horns of the fourth beast with iron teeth represent the ten dominant Seleucid kings after Alexander the Great’s empire splintered into four regions.

The smaller horn is Antiochus IV who put down three potential Seleucid leaders (horns) before him.

Just because a prophecy has been fulfilled once, it doesn’t mean the prophecy is no longer instructive. Daniel’s prophecies are excellent examples of this idea.

Written from the perspective of the Babylonian exile, these prophecies describe the coming suffering of God’s people under foreign rule and look forward to a time when God will liberate them.

During the next 300 years, the Jews watch Daniel’s prophecies unfold. The Persian Empire is conquered by a Greek, Alexander the Great, in 333 B.C.

Alexander’s short reign is followed by the division of the empire into four districts governed by his politically inexperienced generals; Israel is ruled by a string of cruel men — culminating in the reign of Antiochus IV who attempts to turn Jerusalem into a Greek city, bans the Torah, and even builds an altar to Zeus in God’s temple.

In the face of such pagan influence, God instigates the Maccabean Revolt of 167-165 B.C. At that time, Jerusalem’s God-fearing traditions return, and Israel is ruled by the Jews.

But these historical facts are not the end of God’s message. Within Daniel’s prophecies is a description of the end of the age, a time when evil will be punished and the Liberator will reign.

Some Jews and Christians have read this cryptic language, “time of the end,” to refer to the end of the world; but others believe the context points to the “time of the end” of the exile of God and His people from the full and final restoration of temple worship in Jerusalem.

Daniel is just one man, yet he carries the sins of his nation to God and pleads with the Almighty to forgive and rescue His people.

Their collective failures to live up to the covenant they made with God has scattered the chosen people to the four corners of the earth and have brought ruin to Jerusalem.

After reading the prophet Jeremiah, Daniel knows that the calamity will not be over until God’s people come back to Him.

With fasting and prayer, Daniel hopes to begin the process of restoration. God’s covenant with Israel includes provisions for both blessings and curses.

When the people follow God and keep His teaching, they can expect to live peacefully in the land God promised.

But when the covenant people rebel against God and ignore His teaching, their actions — or lack of actions — bring into effect the curses.

Daniel appeals to God’s own interest as the One who cares about His name and His reputation. The fate of Jerusalem and His people reflects on Him.

Although God has countless heavenly messengers, only two are named in the Bible: Gabriel and Michael.

These heavenly messengers fill many functions in the Bible; for example, they are members of God’s divine council, they lead the heavenly army, and they deliver the words of God.

In Daniel, Gabriel is a messenger in the most literal sense, bringing a revelation to Daniel through the explanations of a dream and of Scripture.

Gabriel’s announcements about the coming Liberator do not end with Daniel. In the New Testament book of Luke, he is the one who announces the impending births of John the Baptist and Jesus to Zechariah and Mary, respectively.

After his death Alexander’s kingdom is partitioned among his four generals, two of whom figure prominently in Daniel’s prophecy.

Alexander’s generals continue to fight over Israel and its citizens. Seleucus Nicator rules in the north (Syria). Ptolemy Soter rules in the south (Egypt).

The most extreme examples are in times of persecution when culture is actively hostile to faith. Persecution does not destroy true faith; it refines it.