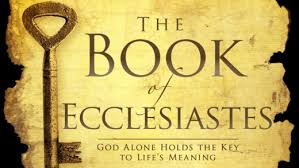 By the wise teacher of Israel

One of the most enigmatic books of the Old Testament, Ecclesiastes is the teacher’s treatise on the pleasures and futility of life.

Wisdom literature such as this would have been passed down from one generation to the next, perhaps in an assembly of young men from teacher to student or in a home from father to son.

The English title, Ecclesiastes, comes from the Greek translation of its Hebrew name, Qoheleth, meaning “one who gathers.” Not much is known about this “gatherer” of students, the teacher.

Some identify him with Solomon because of the king’s traditional association with wisdom and because of 1:1 and 1:12–2:11, where the teacher claims to be a son of David, king in Jerusalem, and recalls the activities of a king.

But the author is anonymous, and the book’s context and language imply a much later origin.

It is impossible to determine the exact date when Ecclesiastes was written. Based on the use of Persian loan words and Aramaic phrases within this Hebrew text, it is likely that the writer was living in or around Jerusalem any time from the sixth to fourth centuries B.C.

The teacher provides some meditation on life and on the lives of those who have gone before him. The backdrop to this book is an implied story—the story of empire and what it means to rule and be ruled by powerful kings.

This profound consideration of life helps the reader to learn from previous influential figures, from their beneficial and disastrous decisions and pursuits.

The Great Equalizer Of All

One of the most important words used to describe life in Ecclesiastes is hebel. It is used 38 times. While this Hebrew word is notoriously difficult to translate, its general meaning is “breath” or “vapor.”

In Ecclesiastes, it implies that life is fleeting, like a breath, like a morning mist; it suggests that everything that happens lacks permanence and is ultimately provisional.

After carefully examining nearly every aspect of life, the teacher concludes that nothing lasts; nothing and no one can escape death, the great equalizer of all.

Nevertheless, human beings are wired differently from other creatures, for God has placed eternity in our minds (3:11). So the best a person can do in this life is to remember the Creator, hold Him in high regard, and keep His commandments.

The contrast between God and humanity could not be starker. The teacher drives this point home by reminding his reader that human lives and earthly accomplishments are fleeting. Nothing tangible is permanent. No work lasts. It all slips away and vanishes into thin air.

Compare that to God. Everything God does is substantial. Everything God accomplishes lasts forever. Every word God speaks makes a difference. And so, God places within every person a sense of eternity to know yet not understand Him.

This world with all its goodness and beauty is not as good as it gets. There is more, so much more, and we are made for that reality too. But not now, not yet.

The creation story in Genesis 2 recognizes the common origin of humanity and the animals. There God forms the first human from the “dirt out of the ground” and breathes into him the breath of life, and the man known as Adam becomes a living being.

But within a few short verses, God declares that it is “not good” for Adam to be alone and seeks a “perfectly suited partner” for the human. So God forms from the “ground” every animal of the field and every bird of the air, and He brings them to Adam to see if any of them are a “right and proper partner.”

Finally, when no suitable companion has been found, God fashions another creature from Adam’s own human flesh. When Adam sees her, he knows he has met a perfect partner.

Clearly, both Genesis and Ecclesiastes stress how much humanity shares in common with the animals. While we may be different — as explained in the Genesis story — we are all creatures, made of the same stuff, breathing the same air. And perhaps most to the point, we share a common destiny: death.

The imbalance of power creates many victims. Worldly power, sourced in corrupt systems “under the sun,” is on the side of the oppressor. Few are in the ditches with the broken and poor.

How often people have arisen from relative obscurity to lead great movements in society! The Bible itself is full of such stories: Joseph goes from slave to prisoner to vizier of Egypt; David goes from shepherd to king of Israel; Esther goes from foreign exile to queen of Persia; Peter goes from fisherman to church founder.

Their stories inspire others, but later generations remember only anecdotes and forget the passion and character that move leaders from obscurity to leadership in the first place. Life is fleeting. Victories do not last. In this imperfect interim world, greatness is only provisional.

There is nothing like the sense of gratification that comes from working hard all day, when bread and cheese taste as good as the finest steak. The ability to work, strength to work, and desire for work are all gifts from God.

When we understand that and use those gifts accordingly, simple things like sleep and a good meal are causes for joy and celebration. But those who are rich and idle can’t buy a good night’s sleep or a stress-free meal or a moment’s peace.

The words, “it would be better if that person had been stillborn,” may shock the modern reader because it is hoped that no child is stillborn; believers pray for a good life for all of God’s creatures.

But the writer of Ecclesiastes does not dwell on the fate of the stillborn; instead he contrasts the life of the person who finds no good in life with the fate of the child who never drew breath, never saw the sun, and never was given a name.

Often wisdom invites us to ponder great questions. The question, “Can anyone make straight what God has made crooked?” echoes the words of 1:15 — “Something crooked cannot be made straight.”

Only God can determine what is and what is not. God makes our paths crooked or straight. And we often do not understand why one person’s way is straight and another’s is crooked. The message of the teacher is simple: reverence God regardless of the path you have been given to walk.

After each act of creation in Genesis 1, “God saw that His new creation was beautiful and good.” When creation is nearly complete, God not only declares it “good” but is described as “savoring its beauty and appreciating its goodness” (Genesis 1:31).

In the creation account recorded in Genesis 2, God places the tree of the knowledge of “good and evil” in the garden and commands the first couple not to eat of the tree. But that is precisely what they do; and in the act of eating, they gain knowledge of good and knowledge of what the absence of good brings.

Adam and Eve’s children live with this dichotomy. For example, when Cain is distressed over God’s choice of Abel’s offering over his, God says to Cain, “ Don’t you know that as long as you do what is right, then I accept you? But if you do not do what is right, watch out, because sin is crouching at the door, ready to pounce on you!” (Genesis 4:7).

The temptation to scheme — that is, to do the “evil” rather than the “good” — begins with the first human pair; the teacher of Ecclesiastes reminds his readers that the same temptation still exists.

At best, life is unpredictable. No one knows whether a pleasant or harsh future awaits. Perhaps it is better that way. It would be nice if good actions always guaranteed a pleasant future, but they don’t. Sometimes, in this fallen world, it is just the opposite.

One thing is certain, however: everyone faces death. It is the great equalizer. Yet the teacher is assured of something else: those who are right with God and live wisely are in His hands.

Verse two states that “wise people move to the right… while fools move to the left.” The contrast between “right” and “left” reflects the ancient Near Eastern ideas of “clean” and “unclean.”

The teacher advises the readers to “remember” their Creator. Remembrance is a pervasive theme in Scripture. Throughout the Bible, God remembers His covenant people, and the covenant people are told to remember the promises and actions of God on their behalf.

Thus remembering in the Old Testament is an action of both God and God’s people. Memory was as fundamental to the faith of ancient Israel as it is today. Believers gather together to remember who they are and to whom they belong. This communal memory shapes reality, forms identities, and determines right living.