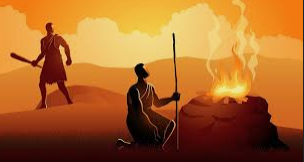 Why is Cain angry?

He is angry enough that he is going to slay his brother.

Back of premeditated murder there always is anger. Our Lord said that, if you are angry with your brother without a cause, you are guilty of murder.

Back of anger is jealousy, and back of jealousy is pride. There is no sense of sin whatsoever in spiritual pride.

James put it in language like this: “Then when lust hath conceived, it bringeth forth sin: and sin, when it is finished, bringeth forth death” (James 1:15).

Cain’s anger led to murder, but back of that was his jealousy and also his pride. And that is how God deals with him.

He says to Cain, “If thou doest well, shalt thou not be accepted?”

Actually, the meaning is better translated as, “Shalt thou not have excellency?”

The eldest son always occupied a place of preeminence, and this boy thinks that now he will lose that. God tells him there is no reason for him to lose it if he does well.

To do well would be to bring that which God had accepted from Abel, a sacrifice and the acknowledgment that he was a sinner. But not this boy—he’s just angry. “Sin lieth at the door.”

There are those who have interpreted this as meaning that a sin offering lies at the door; that is, that there is the little lamb lying at the door.

That makes sense because that was true, but I do not think it means the sin offering here. Up to this time and beyond this time, in fact, up until Moses, as far as I can tell from the Word of God, there was no sin offering.

That is the thing that Paul is saying in Romans 3:20: “. . . For by the law is the knowledge of sin.” The offerings that were brought up to that time were burnt offerings.

Job in his day, which obviously was before Moses, brought a burnt offering. It was not in any way a sin offering. I think if you will examine the Scriptures, you will find that that is true.

It is obvious that Cain did not realize how vulnerable to sin he was. When God said to him that “sin lieth at the door,” I believe He was saying that sin, like a wild beast, was crouching at the door waiting to pounce on him the moment he stepped out.

For that reason Cain needed a sacrifice that would be acceptable to God for sin, a sacrifice that pointed to Christ. “Not as Cain, who was of that wicked one, and slew his brother. And wherefore slew he him? Because his own works were evil, and his brother’s righteous” (1 John 3:12).

“If thou doest not well, sin lieth at the door.” To do well would have been to bring the kind of offering that Abel had brought, a burnt offering.

You find that Abraham also offered a burnt offering, for there could be no transgression until the law was given; that is, sin would not become a trespass against law until then.

Therefore, you find that God actually protected this man Cain.

[6] And the LORD said unto Cain, Why art thou wroth? and why is thy countenance fallen?

[7] If thou doest well, shalt thou not be accepted? and if thou doest not well, sin lieth at the door. And unto thee shall be his desire, and thou shalt rule over him.

Genesis 4:6
And the LORD said unto Cain, Why art thou wroth? and why is thy countenance fallen?

Genesis 4:7
If thou doest well, shalt thou not be accepted? and if thou doest not well, sin lieth at the door. And unto thee shall be his desire, and thou shalt rule over him.