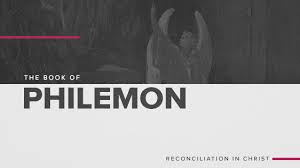 Personal letter to Philemon of Colossae

There’s a story behind every letter Paul writes, and this is an especially vivid one. While Paul is in prison, he writes to his friend Philemon, a Christian leader in Colossae, about this man’s slave Onesimus. Philemon is apparently a well-to-do follower of Jesus, having a house large enough for a church to gather there.

He has a good reputation as a man of faith and love. Somewhere he met Paul, and they became good friends and coworkers in Kingdom causes.

Onesimus is Philemon’s slave who encounters Paul in prison—tradition says that Onesimus is a runaway slave who happens to meet Paul when he is under house arrest—and becomes a believer.

For a time, the Lord’s imprisoned emissary finds Onesimus to be a useful assistant; but eventually he sends Onesimus back to Philemon with an appeal rather than a command: Paul asks Philemon to receive Onesimus back as more than a slave—as a beloved brother.

Surprisingly, Paul addresses this letter to Philemon and the entire church that gathers in his home. What seems at first to be a private letter is meant for public reading. Perhaps Paul hopes to bring a bit of social pressure on Philemon, or perhaps Paul wants to address the issue of slave treatment to all Christian slave owners.

Paul uses the story of the runaway slave to discuss the larger issues of forgiveness and equality. In the kingdom of God, all relationships must exhibit forgiveness and acceptance of each other; and everyone is an equal participant in salvation, regardless of his or her station in life.

The history of humankind is stained by the guilt and pain of slavery. May the words of Paul the emissary echo into modern culture so that believers treat all human beings as brothers and sisters in Jesus.