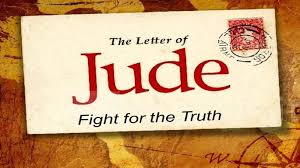 From Jude, a Christian leader

Although this letter is named for its author rather than for its recipients, identifying this “Jude” is a bit of a challenge since Jude (or Judas) was a common name at the time. Because the hero of the Maccabean wars bore the name Judas, Jewish parents often named their boys Judas during this period.

The author describes himself as a servant of the Anointed Jesus and the brother of James. But which James? That, too, was a common name. Church tradition suggests that he was James, the brother of Jesus, the head of the Jerusalem church, and the author of the letter James.

If so, this makes Jude the second New Testament letter written by a family member of Jesus. During Jesus’ public ministry, Jude was not a disciple of Jesus. As with other members of His family, Jude likely became a follower of Jesus after the resurrection when the crucified and risen Jesus appeared to His followers and family.

Jesus is Lord and Master

Jude writes this letter in the last half of the first century A.D. to an audience facing critical problems related to the influx of false teachers in their church. These false teachers are not out in the world where they may be easily avoided; they have infiltrated the church and are making inroads into the leadership of the young and vulnerable community.

He writes this letter to encourage believers to keep up the struggle for the true faith. Some things are worth fighting for, and the truth of the gospel is one of them. Jude has often seen God’s grace perverted by those who want to turn freedom into a license to sin.

This was a common problem then, and it remains one now. If God is loving and forgiving, and if God’s grace is free, then it is easy to take His goodness for granted. Jude counters that to do so denies our central confession: Jesus is Lord and Master.

Defectors will be judged and defeated

After urging his audience to fight for the true faith, Jude looks back over a number of stories from the Bible and Jewish tradition that demonstrate how God’s judgment has fallen upon those who disobey Him.

In the same way, vile characters have slithered into Christian congregations in various places and are dismantling the spiritual communities by grumbling, fault finding, and promoting sexual perversion. Yet Jude is hopeful that if true believers will pray in the Spirit and continue in God’s love, these defectors will be judged and defeated.

A careful comparison of this letter and Peter’s second letter demonstrates a lot of common ideas and themes. Clearly the audiences for both letters were facing similar troubles. The problem of false teaching in the church was not just an ancient problem. Even today, Jude’s authoritative counsel holds.