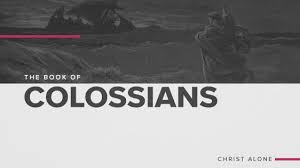 Letter to the church in Colossae

Paul wrote this letter about 25 years after his call to be an emissary for Jesus. The headstrong Paul who had planted churches and pioneered the gospel had now become an elder statesman for the growing movement. His reputation was so great that he could send a letter to a church he had neither planted nor even visited and expect to be received as a voice that must be heard.

Even as a prisoner

When Paul wrote this letter, he was in prison. The people in Colossae would have known where, so there was no need to put it in the letter, but that important detail is lost today. It is often said that he wrote it from prison in Rome, although Ephesus or Caesarea cannot be ruled out.

The fact is that the Lord’s emissary often found himself in prison because his message clashed with the local political, economic, and religious powers. But even as a prisoner, Paul was able to find a secretary or urge a coworker to help him craft and dispatch a letter.

Liberating all of creation

Colossae was an important city located about 100 miles east of Ephesus. There were many religious options in Colossae, Jewish and pagan; and apparently some in Colossae thought that Jesus should simply be added into the mix. But for Paul, Jesus is no add-on.

As the Creator and Sustainer, as the head of the church, Jesus deserves their full and undivided attention. According to Paul, Jesus came to liberate not only individuals but all of creation from the powers of darkness.

Head of the church

Paul prays that God will encourage the believers in Colossae to live with a spiritual perspective and that their lives will reflect the transforming power of Jesus (1:9–10). One of the best-known passages in this letter is the wonderful hymn about Jesus found in 1:15–20; it celebrates not only His role as the Creator and Sustainer of the world, but also as the Reconciler and head of the church, which is His body.

He then challenges the believers in Colossae to turn from their past, as if their old selves were dead, and to keep their eyes fixed on the goal of new life hidden in Jesus (3:2–4). Paul speaks individually to wives, husbands, children, slaves, and masters and finally asks them to pray with him that “we can go on telling the mystery of the Anointed One.”

Paul truly sees all believers as sharing in his ministry and his imprisonment.

As Paul gives thanks to God — a normal thing to do in a letter — he remembers a hymn he heard in the churches. The Colossian hymn (verses 15–20), as we call it, is all about Jesus.

It celebrates His reign, first as the Creator and Sustainer of the cosmos and second as the head of the church and the One who reconciles every broken thing to God by what He accomplished on the cross.

In this hymn, the story of redemption is a witness to God’s love. Paul wants the Colossians to understand who they are; but to do that, they must first know to whom they belong.

At the heart of the good news is a mystery hidden in ancient Scriptures but now exposed to the world through the lives of the church’s holy ones. Paul never refers to just one “holy one”; he always uses the plural. He knows that holiness is too difficult for us to accomplish on our own.

Each of us has to be called and equipped by God, but we also have to be accompanied by others who’ve answered the call. Those who say “yes” to Jesus become the church, the company of those rescued from darkness and ultimately from death.

Paul is fond of calling the church the body of the risen Jesus. Our own hopes and dreams for the future are concentrated in Him. Not only do we dwell in Him, but He also dwells in us.

Paul knows the people in Colossae are facing many religious and philosophical options, none of which are neutral. Notice Paul doesn’t say, “Just add Jesus to what you already believe,” or, “Factor Jesus into your philosophy,” or, “Include Jesus in this or that ritual.”

The claim that “Jesus is Lord” does not allow that. If Jesus is Creator, Sustainer, and Redeemer of all creation, then all other teachings must give way. All people must bow before Him and only Him.

For Paul it isn’t enough just to believe the right things. Right belief always produces right living. The gift of salvation demands that we put into practice the character of our King. Just as we take off and throw away old, worn-out clothes, we must strip off certain attitudes and actions of our old selves.

Since our lives have been made new in Him, things like sexual immorality, greed, anger, lies, and the rest must find no place in us. But it is not enough to strip off the old; we must put on the new.

And that new creation has many qualities of Jesus: compassion, gentleness, and humility; putting up with each other, forgiving each other, and above all, loving each other. These are the ways of Jesus, so they must be our ways too.

Family life has changed since Paul’s day. Today, sociologists talk about modern families as “nuclear”: two parents with one or two children. In Colossae, as elsewhere in Paul’s world, families were extended by nature: they consisted of a husband, a wife, lots of children, servants, grandparents, aunts, uncles, and others.

So when Paul addresses the family, he does not envision the modern version of it. He addresses the main family members: wives, husbands, children, fathers, and then slaves. The family reflects the order God desires in the church.

Each member is to be responsible to the whole, and love and respect are to serve as the guiding principles within family relationships. Paul and Peter both use the term “submission” within family and church relationships as a description of order and support.