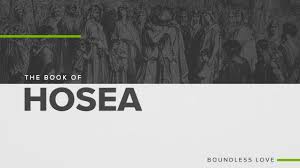 The message of Hosea, a prophet of consolation

During the second half of the eighth century B.C., the prophet Hosea lives in Northern Israel and is called by God to do something amazingly hard: God tells him to marry Gomer, a woman with a promiscuous past whom He knows has a promiscuous future.

The pains Of Unfaithfulness

Even after they are husband and wife, Gomer runs away and stays with other men. Feeling the hurt of Gomer’s betrayal, Hosea begins to understand what God is doing.

GOD’s Judgement On His Bride

These activities violate their covenant with God just as Gomer and eventually Hosea’s unnamed second wife (3:2) violate their marriage covenants with Hosea. Marriage and adultery perfectly symbolize the broken relationship between God and His people.

The Lord wed Israel at Mount Sinai; He wooed and pursued His bride only to have her pursue other lovers. Because of her infidelity, God’s judgment is sure to fall on His people, and even the land itself will suffer the consequences of Israel’s actions.

Adultery Against GOD And Man

The metaphor of Israel’s current and future relations with God continues in the names given to Gomer’s children: Jezreel (“God sows”), Lo-ruhamah (“No mercy”), and Lo-ammi (“Not my people”). These children are a constant reminder of Hosea’s broken marriage and his wife’s infidelity.

Abandonment Of The Next Generation

This will actually happen in 722 B.C., when God uses the Assyrians to destroy His people and sends the ten northern tribes into the oblivion of foreign exile.

Forgetting Former lovers For The Love Of GOD

But separation is not the end of the story, for God continues to love and pursue His people. A day is coming, the prophet says, when His people will forget her former lovers and God will love her completely (14:1–4).

Whenever God’s children abandon proper worship of Him in favor of any earthly thing — be it worship of another god, dependence on themselves, or trust in foreign leaders — they break their covenant with Him. Breaking that promise is like committing adultery, which is literally the destruction of a marriage covenant.

Here, God is furious with Israel because they have chosen to serve the gods of other nations in addition to Him; they are committing adultery against Him.

Under the rule of King Jeroboam II in the Northern Kingdom of Israel, worship of a Canaanite deity named Baal is common. Many people believe he is the god of weather and therefore the one who makes the earth fertile and produces crops.

Like God, he is worshiped through the donation of gifts and sacrificing of animals, but Baal is also honored by the activities of prostitutes at shrines dedicated to him.

The men and women who are employed at those shrines are paid for their fertility rituals by customers (worshipers) not only with money but also with the produce of the land their sexual activities supposedly fertilized: bread and water, wool and flax, oil and wine.

Hosea’s prophecy is fulfilled in 722 B.C., when Shalmaneser V leads his Assyrian army to conquer Samaria, the capital city of Israel. But leveling the city and slaughtering countless citizens isn’t what ends Israel’s legacy.

In the years following the war, Sargon II systematically deports the remaining Israelites to cities in the Assyrian Empire and repopulates Samaria with foreigners to suppress future rebellions.

This policy decimates the cultures of the ten tribes who inhabited the Northern Kingdom and leads to the fabled “Lost Tribes of Israel.”

It may be assumed that the members of the ten tribes assimilate into their new cultures and abandon their history and religion; they simply blend into their surroundings to survive.

However, in the third century A.D., Christian poet Commodian compiles the writings of several early rabbis and weaves the story of the ten tribes’ post-deportation lives.

These ten tribes reside in a sort of paradise beyond a river, where everyone lives long lives, experiences no pain, and follows God’s laws. One day, the story goes, these tribes will return to Jerusalem, recapture her, and dwell in her.

Two types of ovens are used in ancient Israel: tabuns and tannurs. Both are beehive-shaped structures molded of clay, broken potsherds, and chopped straw, and are commonly found in a house’s courtyard. At the top is a capped opening, which regulates the inside heat and allows the baker access to the oven’s interior.

Tabuns are fueled with cakes of dried manure and straw (Ezekiel 4:12-15), while tannurs are fueled by wood fires.

Once a tannur’s wood fire burns down to the embers, the oven is ready for baking. Each day, women mix flour and water, knead the dough, and add a small amount of salt and fermented dough (from the previous day’s work) to the mixture.

After balls of dough have risen, they are flattened and shaped into discs. These discs are then easily tossed inside the oven’s opening, where they stick to the walls and cook in just minutes.

Israel’s harlotry is practiced not only by diplomatic accords with other nations but also by worship of their gods who serve as witnesses to these alliances.

Here an idol is fabricated and worshiped by God’s own people.

As their ancestors did in the wilderness while Moses was on the mountain with God, they make an image of a calf.

They turn from the True God to worship their own creation, a crude imitation of God’s creation.

The anger of the Lord is again aroused as it was in the wilderness, and He will crush both the idol and the idol worshipers.

In Israel’s final years before conquest, the political atmosphere is in turmoil.

Kings Zechariah, Shallum, and Pekahiah have been assassinated in political coups, and ambitious men are making alliances with foreign enemies hoping to gain international support for their own factions and solidify their own powers.

These attempts at ascension and stability with the help of international alliances voids the one thing that can bring peace to Israel — the people’s covenant with God.

Instead of relying on God, all of Israel’s leaders allow themselves to be consumed in the regional politics.

In the early eighth century B.C., Egypt’s power is waning and Assyria is gaining momentum. Israel is the battleground between the empires, so Israel’s kings think they can leverage the nation’s geographical position and gain protection from one empire or the other by paying tributes.

Instead, the cities are trampled in successive wars, and Israel’s borders continue to shrink until Samaria is finally overrun by the Assyrians in 722 B.C.

Every year, the Israelites live in tents for one week as part of the Feast of Tabernacles. This festival reminds the people of God’s constant protection of their ancestors as they wandered for a generation in the Sinai desert.

However, the Israelites won’t enjoy their coming time in tents. Living in tents will mean they’ve lost all the wealth and security they built up in their solid houses and cities; they’ll be nomads wandering the earth, but this time without God’s constant protection.

In a reversal of the Exodus story, these wanderings will be a prelude to bondage in a foreign nation, where they will be slaves without the ear of God, as their ancestors were in Egypt.

16 thoughts on “Introduction Of The Book Of Hosea – Compared Violations”