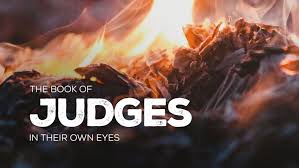 The period after Joshua and before the kings of Israel

By Samuel or others

The study Book Judges tells the history of God’s people after their arrival in the land flowing milk honey God had promised their ancestors and of how they live in the period between the conquest of that land of Canaan and their turning away from God and toward earthly kings in search of order and safety.

It also continues the Israelites’ story of faithfulness—and faithlessness—since they have been freed from slavery in Egypt. Two great leaders, Moses and Joshua, have warned them that if they fall away from faithful worship of God, they will suffer for it; but as is often the case with human beings, a warning is not enough.

They have to experience things for themselves.

Before There Were Kings

Book Judges Introduction recounts the experience: On more than one occasion, the people of Israel fall away from the worship of their God, are punished for it, and then pray for deliverance.

The deliverer is a divinely appointed judge, a combination of military general and civil leader, a redeemer or liberator.

It’s a cycle that is repeated many times in the Bible Book Judges, which finally ends in atrocity as we see how far the people fell in those days when “there was no king in Israel, and everyone did what seemed right to them” (21:25).

One of the most famous judges, Samuel, whose story is not told until the books of Samuel, is traditionally credited with recording the many stories that appear in Judges.

This book is divided into three sections:

The juxtaposition of so many differing stories reflects the involvement of many storytellers and editors in this final version of Judges and the importance they all placed on every divinely inspired story—even those stories that are crude, gruesome, and heartbreaking.

Judges shows us an unromantic view of life, love, and faith—but one that seems completely realistic. We see people at both their best and their worst. It is the story of a society in slow descent, arrested sometimes by God’s intervention through human agents, and it reads as cosmic truth.

We are often guilty of exalting things other than God: our possessions, our relationships, our institutions, even our nation. The stories of the people of Israel remind us that we should place true faith in God alone, and that when we forget, the spiritual and real-life results may be devastating.

Modern readers wrestle with the violence in the Old Testament. In the wake of events like the holocaust, when the Jews were slaughtered by the millions, many do not see God as a protecting God or as a God of might.

But in Judges we learn about a God who fights for His chosen people or empowers champions to protect them. This was certainly the way the people of God in the time of Judges thought about God, as defender and protector, and the way people in the ancient Middle East understood faith, worship, and divinity.

But the Lord is different from all the other gods. He is jealous, so when His people abandon Him, all that power is turned against them in the form of invading armies. The Israelites have need of judges who can lead them in their military exploits and who can keep them faithful to the mighty God of Israel.

After Joshua dies, the people of Israel are left without a leader. How will they know what to do? They are still surrounded by hostile peoples; there is still land to be fought for and won. The people of God have some military success, but they are not able to drive out all the people of Canaan.

They are forced to live among the pagans; and their ways, women, and gods become a temptation to the people of God. This situation is the catalyst for the next 1,000 years of Israel’s cyclical unfaithfulness and repentance.

God takes what is different about Ehud and makes it a strength. This is God’s habit throughout the Old Testament — making unlikely heroes into agents of His deliverance from the enemies of Israel. Earlier God used Moses, an infant marked for death, to liberate His people from Egypt.

Known as the Song of Deborah, this victory song is one of the oldest passages in the Bible; it is beautiful and powerful, as well as filled with information. In addition to praising and chastising certain tribes for their role — or lack thereof — in battle, it also celebrates a victory God has given His people through the agency of two women: the judge Deborah and Jael, who, as Deborah prophesied ( verse9 ), brings final victory over the enemy general Sisera.

These cultures value masculine strength, aggression, and war-prowess; they don’t value female ingenuity and courage. So for the first hearers of this story, the last people they expect to bring military victory are women. But once again, God takes ordinary people with their gifts, strengths, and weaknesses — and brings military victory through the unexpectedly strong hands of women.

This unnamed messenger brings a familiar message, one we find coming from both well-known and unknown prophets in the Scriptures: “I am the Eternal God, and I have done many things for you. You swore to be My people, but you have turned away from Me and turned toward other gods.”

God has brought the patriarch Abraham out of the east and initiated a relationship with him. Later the people of God make a covenant with Him, a sacred contract that both sides are expected to honor. When they are faithful to God and God’s laws, the people of Israel prosper.

Whenever the Israelites fall away from true belief and true practice, God withdraws His blessing from them. This messenger is simply reminding them of what they already know — as prophets sometimes must.

Gideon is one of the most powerful judges of Israel: he attacks and overthrows kings; he plunders their royal treasures; and after his great success against the land of Midian, the people of God actually want to make him their king. This desire is logical.

Other peoples have kings to lead them into battle and to rule over them. Why not them? But this is not God’s desire for His people, and Gideon knows that pain, destruction, and bloodshed follow when someone pursues the throne against God’s will.

Gideon tells them he will not rule them — and neither will his sons — so they can get that idea out of their heads. But the thirst for power leads to intrigue, and one of Gideon’s sons plays on the people’s continual desire for order at the hand of a king.

The judges are often people of great faith or great strength or great power who lead and direct. But like all of us, they are imperfect and sometimes make grave mistakes. Jephthah’s name is now remembered mostly because of the foolish vow he makes to sacrifice the first thing he sees when he returns from his great victory.

Although this vow comes out of his unfaithfulness — Jephthah does not trust God to give him victory — Jephthah shows immense faithfulness in keeping his word despite the tragic consequence of losing his only child.

[4] The longer the Israelites are in Canaan, the more they find themselves drawn into the beliefs and practices of those around them. Samson, although he is a deliverer of his people and set aside by God, demonstrates the worst traits of his people.

He actually takes a wife from among the other people who are trying to conquer Canaan, the Philistines. But in all of this, we are told, God is working out a purpose; Samson has the Spirit of God.

Not only does God use imperfect human beings for His own designs, but God can use human weakness to achieve His goals. Samson’s weakness, although it leads to his personal destruction, becomes God’s strength and leads to great victories for Israel.

Samson’s bride and Delilah are both presented as unfaithful and deceitful, and Delilah’s name has become synonymous with any wily and seductive woman who wants to ruin a man.

Although these betrayals are part of God’s purpose, some readers have used these particular stories to put down all women. It’s good to remind ourselves that earlier in the Book of Judges God uses Deborah and Jael, brave and strong women, to achieve His purpose.

The characters in the story of God’s people — men and women alike — are sometimes good and sometimes evil. Even a Levite, someone set aside to the priesthood of God, can behave with selfishness and cowardice.

Certainly the “outrage” the Israelites are reacting to is the Levite’s brutal dismemberment of the woman.

Once they hear the Levite’s story of his attack by the Benjaminites, the community of Israel supports the Levite and holds Benjamin accountable for the Gibean men’s wicked actions. When all the tribes come to the aid of the Levite, we see an Israel that is united — against Benjamin.

This story lays the groundwork for our understanding of relations between the tribes as Israel enters the monarchical period. Saul, the first king and a Benjaminite, will abandon the laws of his God and will be replaced by David from Judah, who has the support of the rest of Israel.