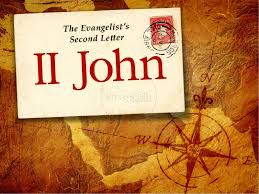 Letter to a lady and her children

John, the emissary of Jesus, writes this second letter shortly after his first. But unlike his first letter, where he jumps into the heart of the matter with a direct witness about Jesus, John begins this brief letter in the customary way by stating who is writing the letter and to whom it is written. He describes himself as “the elder.”

This is probably an affectionate title his readers know him by, referring both to his old age and to his authority as an eyewitness to the life of Jesus. As with his first letter, the recipients are not completely disclosed. John is writing to “a lady…along with her children.”

Since he doesn’t list any of their names, it is possible that he is using the phrase to signify a church and its members. Regardless of the specific recipient, this letter addresses the concerns of all believers, not just a few individuals, just as his first letter did.

Two major themes stand out in the letter: love and truth. Even though John emphasized love in his first letter, he proves its importance by expounding on it in this one. He describes love as measurable action—not sentimental emotion or academic theory. He says love is accomplished when we obey the teachings of Jesus.

Next he warns of the danger of false teachers, as he did in his first letter. False teachers who deny that Jesus is both fully God and fully human are not to be tolerated. Welcoming them in any way, especially with hospitality, promotes their deceptive plans.

The person of Jesus

John sees love and truth embodied flawlessly in the person of Jesus. He wants to encourage his readers to reflect the true love of God by knowing who Jesus is, resisting false teachers, and serving each other selflessly.