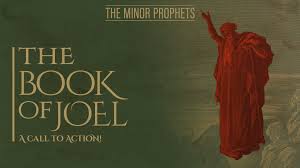 The day of the Eternal is near

The message of Joel, the son of Pethuel

The Book of Joel continues the redemptive story of the Book of the Twelve (also known as the Minor Prophets) that starts with the Book of Hosea.

Little is known about the author of this intense and graphic prophecy which uses a locust infestation to predict an invasion by a powerful army.

Joel, like many other prophets, has a gift known as second sight. This means that God shows him a deeper, transcendent reality through what he sees in the real world. These are more than visions; they are harbingers of real events, visible to all, and God uses them as an occasion to voice His message.

A Restoration The World Has Never Seen

Joel’s focus on Judah and Jerusalem may suggest he is prophesying sometime after the conquest of the Northern tribes of Israel in 722 B.C., but the oracles are general enough to refer to any of several invasions of the holy land: the Babylonians in the sixth century B.C., the Greeks in the late fourth century B.C., or the Romans in the first century B.C. Or perhaps they anticipate a future apocalyptic invasion.

Regardless of its particular historical context, the book uses the locust invasion to warn God’s people of divine judgment and call them to repent and change their ways. More than any other prophet, Joel builds this message on his understanding of the day of the Eternal One.

When that day comes, the prophet says, God will judge the nations and His people; however, for all who repent and turn back to God, that day will usher in a time of joy, prosperity, and restoration like the world has never seen.

From Famine To Prosperity

Locusts in the ancient world are no small matter; a swarm can devour everything in its path, and no pesticides are available to stop it. The insects kill vegetation in the short-term and cause famine in the long-term.

Since the loss of entire crops means the loss of seed for the next planting season, the effects of a locust swarm sometimes last for several years.

God does promise to make up for the calamity, to send rain on the land and pour out His Spirit on all people (2:19–29). This divine rain nourishes and replenishes the land as the divine Spirit re-creates and restores the people.

It is fitting that such a book—concerned as it is with agriculture and ecological restoration—concludes with the expectation that one day the mountains will drip sweet wine, the hills will flow milk, and Judah’s streams will cascade cool, clear water.

Was the day of the Eternal One wonderful to long for or horrific to dread? For Joel, it is both. Each of the five times this day is mentioned, he expresses a different expectation.

In Joel 1:15 the prophet signals distressing locust invasions, in Joel 2:1 the day is filled with human invaders against Jerusalem, and in Joel 2:11 it is a stunning event.

But in Joel 2:31 the outlook begins to change. Not only is the earth transformed with the heavenly rains and Spirit of God, but also the celestial bodies cease to carry out their functions of giving light and setting seasons for the earth.

Both in verse 31 and in Joel 3:14, the day of the Eternal is positive for Israel but ominous for all other nations.

Now the tables have been turned, and Zion is not a mountain devoured by locusts and human armies. It is a wonderful garden where the Eternal One meets constantly with His people, surrounded by abundant and perennial agriculture.