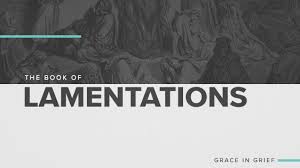 A communal response to the fall of Jerusalem

By Jeremiah, the heartbroken prophet

Oh, the pain and despair of it all! How can God allow such oppression, such suffering, such agony? There are no words to title this book, only the “aaghh” of grief and despair. And so it begins.

The people of Judah are broken, humiliated, and abandoned in the aftermath of Jerusalem’s destruction and fall at the hand of Babylon (586 B.C.). Grief can be such dark chaos.

Words tumble recklessly, senselessly, out of a heart broken with total despair. But how does one express these dark thoughts?

They need shape and order. To get a handle on this sadness, to pull the thoughts together, they are brought under the discipline of poetry. They are forced into the order of an acrostic, or rather four separate acrostic poems.

In the Hebrew each poetic set of lines begins with a successive letter of the Hebrew alphabet, with the exception of chapter 3 where sets of three lines are set as an acrostic.

The words and thoughts are made to conform to this literary device simply to make it possible to bend these horrific scenes into a shape that the people can bear and remember long after the event.

In this way, the writer (whoever he may be) can speak the unspeakable. This English translation uses a form of the acrostic without the strict adherence to the Hebrew style. This poetic form is essential to the presentation of the message.

Tradition associates this book with Jeremiah, so the Christian canon places it after Jeremiah’s prophecy.

There is nothing in the book itself to say who composed its mournful lines, but it was obviously written in the land of and for a people completely devastated by Babylon’s victory.

Lamentations is not just the record of a dark period in history, but it also faces head-on some of the most difficult issues that God’s people must ever consider.

Echoing through these dark moments is the voice of hope, for the Lord is using these harsh measures to bring His wayward people back to Him.

From the dust of destruction comes the rebuilding of the nation and the hope of His redeeming love. God’s anger may not last forever, but His faithfulness to His covenant promises will. For those who put their trust in God, every day is an opportunity to experience His love and mercy.

The people of Judah and Jerusalem have had many opportunities to recognize their failings.

Now they learn that their choices have grave consequences. For generations they have ignored the warnings and continued in idolatry, dependence upon foreign powers, and oppression of the less fortunate.

Yes, the sacrifices in the temple have continued, but they have continually turned away from God. One prophet after another has called them back to a life of trust in the Lord, but they still look to others for assurance. Time has run out.

For generations the Judeans have looked upon the temple in their midst as a comfort and even a protection. Jeremiah stood before the temple and preached to these same people that they should not trust in the lying words of others:

Even good things from God can be misconstrued to turn us away from Him. Now the temple itself will be brought low because of the hard hearts of the people.

Hope is realized when the next generation of exiles in Babylonia receive God’s mercy and are brought back to the promised land, Palestine, in a second exodus, a journey not unlike what the Israelites experienced as they left Egypt under Moses’ leadership.

God surely causes grief and torment, but He also provides kindness that originates from His heart of compassion.

The discipline administered by the heavenly Father hurts, but the pain is not lasting and actually reflects His compassion. When the Lord sends affliction, it is instructive, restorative, and temporary.

Affliction and judgment may sometimes come from the Almighty, but what always springs from the heart of God is a deep and eternal mercy for His people.

Is this poetic hyperbole, or could such a horror really have happened? Even today, famine and disease cause devastation in developing nations reminiscent of what this poet describes happening in Jerusalem.

Suffering will always exist because sin — rebellion against God — affects every aspect of a culture at every level of society.

When Nebuchadnezzar laid siege to Jerusalem in the early sixth century B.C., he did not allow any food or provision to enter the city; he literally waited for God’s people in Jerusalem to starve to death.

As the executioner of God’s judgment, Nebuchadnezzar punished everyone equally, regardless of the severity of his or her sins, because all sin is worthy of death. The people in Jerusalem really experienced God’s dark cloud and His frowning countenance.