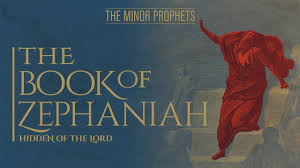 The Day Of The Eternal One Is Near

The message of Zephaniah, a prophet from Jerusalem

Zephaniah is a contemporary of Nahum, living and prophesying in Jerusalem during the seventh century B.C.

His name means “the Eternal One has hidden” or “protected,” and this is an appropriate moniker because the message he delivers to the people of Judah promises that those who seek God and carry out His teachings may be hidden or protected from the Lord’s coming judgment of the nations.

GOD’s Promise To The King

The prophet indicates that he received God’s message during the reign of King Josiah. Josiah came to the throne at the tender age of eight, and in less than a decade, the young king turned to God and instigated a series of reforms that may be either the impetus for or result of Zephaniah’s preaching.

Unlike his wicked grandfather and father, Kings Manasseh and Amon, Josiah rejected foreign gods and destroyed their shrines and temples as far as his royal arm could reach. He decided that Jerusalem should be the one place to worship the one True God.

As Solomon’s temple was being repaired after years of neglect, a priest named Hilkiah found a copy of the book of the law. When the king heard it read, he realized God’s judgment was about to fall on Judah since her people had not followed His ways.

Josiah mourned and petitioned God for mercy, and God responded by promising to let the king live out his days and die before disaster falls on Judah and her citizens (2 Chronicles 34).

The themes of judgment and restoration dominate Zephaniah’s prophecy. Even God’s people in Jerusalem and Judah will not escape the day of the Lord’s judgment because they have bowed down to idols and embraced violence and injustice.

Judah’s neighbors on every side will also experience God’s fury for how they treated His people. Indeed the whole earth will see punishment and desolation, but calamity is not to be the last word.

The prophet calls God’s faithful to turn to Him in repentance and seek His justice. If they do, God’s salvation will follow. He will reverse their shame and restore their fortunes. He will defeat their enemies and remove their fears.

When that day comes and God makes everything right, Jerusalem will not be able to contain the joy of her people.

During the early seventh century B.C., Judah is a tiny nation controlled by the Assyrian Empire and bullied by her neighbors.

Under former Kings Manasseh and Amon, Judah lost all international power and fell into such hedonism that prophets such as Zephaniah are forced to hide themselves. No one in Judah is safe as Philistia, Moab, Ammon, Egypt (ruled by an Ethiopian dynasty), and Assyria continue seizing land God promised to the Israelites centuries earlier (Genesis 15:18–21).

God has frequently used those foreign nations to discipline His children; but they, too, worship other gods and have overstepped the boundaries He set for them. The destruction of these foreign oppressors promises Judah not only revenge but the restoration of the inheritance promised to her people so long ago.

For hundreds of years the Philistines have lived along the coast and taken great joy in attacking settlements occupied by God’s people in the eastern hills.

The arch enemies of Israel, they are an advanced seafaring culture that devastates cities, uproots crops, and drives the Lord’s servants far from their homes.

But God has seen their actions, and fortunes will soon be reversed.