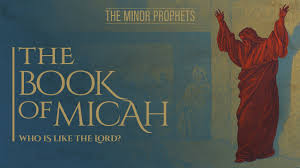 Sin, judgment, and hope for redemption

The message of Micah, a prophet from the country

Micah is a prophet living in the rural areas of Judah at the same time Isaiah is prophesying in the city of Jerusalem.

His name expresses a profound question: “Who is like the Eternal?”

Like many other prophets whose sermons are collected in the Old Testament, Micah understands God’s mind in ways others do not.

He knows well the story of His people and how their past actions have offended God and violated the covenant.

When the people of Israel and Judah neglect their devotion to the one True God, their fortunes plummet; when they move away from the acts of justice and mercy God demands, they suffer.

Micah, like his predecessor Amos, has been given the message that God is about to do a new thing in Israel, but this new thing will involve judgment and transformation.

As with many other figures in the Bible, very little is known about Micah the prophet.

The first few verses of the book indicate that he is prophesying during the last decades of the eighth century B.C. and perhaps into the seventh century (759–687 B.C.).

He is from a small village about 25 miles southwest of Jerusalem that has built up around a trading route, so he may be a merchant—giving him ample opportunity to travel throughout the region.

He considers himself a true prophet bearing true words from God, unlike the many false prophets who tell people what they want to hear.

His message is one of judgment for the rich and powerful who neglect the covenant and one of liberation for the poor and downtrodden who embrace it.

For Micah, faithfulness to God is not just a matter of mastering the forms of religion and performing the requisite rituals; no, true faith embodies love and expresses itself in humility and acts of justice and kindness.

Those who serve God faithfully are rewarded according to the prophet; it is important to note that even in pronouncing gloom and doom, Micah turns eventually toward hope.

God is a God of might and mercy; whatever may happen, God will not abandon His people if they remain faithful. But if they do not, God is willing to forgive those who return to Him.

Among the memorable oracles in Micah’s prophecy are those describing a shepherd who comes from Bethlehem, gathers together the remnant of God’s people, rules with justice, and establishes peace.

Other prophecies look forward to a time when Jerusalem is acknowledged as the center of the world, when war and fear are things of the past, and when people have all they need for productive, meaningful lives.

Early Christians will read and reread these prophecies in light of their experiences of Jesus and become convinced that these hopes coalesce in Him.

The Northern Kingdom of Israel, sometimes called Samaria after its capital city, was conquered by the Assyrian Empire in 722 B.C.

The Southern Kingdom of Judah, where Micah lives and speaks, has been spared that fate, but at a high price: the people have lost the power to govern themselves, pay huge tributes to the Assyrians, and allow the corruption of their religious practices because of the Assyrians’ influence.

All Israelites suffer under these conditions, but Micah’s attention is drawn especially to the poor and dispossessed; somehow, as often happens in wartime, rich people manage to get richer while the poor are exploited, and Micah is outraged at the way the rulers of Judah have taken advantage of those who had little — and now have less.

In the New Testament Jesus speaks of a kingdom where love, respect, and peace are the norms.

It is clear that Micah, too, looks toward a future when there will be no war and neighbors will share their shade trees with no fear.

A time without war and hostility between nations and neighbors can only be realized under the rule of the Prince of Peace.

This is the fourth time in Micah’s prophecy that the city leaders and general population of Judah are called to “listen up” (Micah 1:2; 3:1; 3:9; 6:1). Each time the prophet has something very important to say to those in Judah.

Many Christians wonder what God wants from faithful followers.

People in the past and people today have all sorts of opinions about how the faithful should act; and in several other places in the Bible, all of the so-called laws, rules, regulations, and suggestions are boiled down to their simplest form:

Walk in right relation to the God of Abraham, and do so humbly. By doing these things, Micah says, God’s followers will please Him and live happy lives.

In Matthew 22:34-40, Jesus similarly says people are to worship only one God; to love that God with heart, mind, body, and soul; and to love their neighbors as themselves.