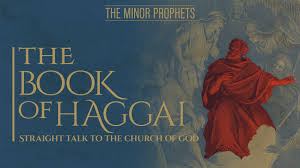 The message of Haggai, a contemporary of Zechariah

Although ancient in its context and composition, the Book of Haggai is applicable for those who, like the sixth-century Jews, have been socially and ethnically displaced and are trying to find a sense of identity and meaning.

After their exile (586–538 B.C.), some of the Jewish people have been told to return to Jerusalem to rebuild their society and God’s temple, first by Persian King Cyrus in 538 B.C. and later by King Darius in 520 B.C. (the same year, God gives this message to Haggai).

As the exiles arrive, they are greeted by those who stayed behind in Jerusalem during the ordeal.

God raises up the prophet Haggai and his colleague Zechariah to encourage both the returning exiles and the Jerusalem citizens to come together and focus on rebuilding the Lord’s temple so that He may renew the land to sustain the new communities and to provide grain and animal offerings for the temple sacrifices.

GOD’s Presence And Character In Jerusalem

The prophet announces to the people that their current frustrations and adversities result from giving their time and energies to building their own homes instead of rebuilding God’s house. He communicates to Jerusalem’s leaders that the restoration of the temple is not solely related to issues in the city; God wants to display His presence and character first in Jerusalem and then to the rest of the world (2:21–22).

Because of God’s message, Haggai is instrumental in bringing solidarity to a displaced people who are anything but unified in how they will make a new life in their homeland.

Besides serving as an encouragement to the people, he also inspires Zerubbabel and Joshua to take the lead in governing the people, rebuilding the temple, and regaining God’s favor. His ministry is apparently very effective, for soon the work begins and the temple is completed in 515 B.C.

The words of Haggai speak to all people who have been marginalized and are fragmented by how they view themselves and their role in society.

As the prophet brings peripheral groups together for the singular task of restoring God’s earthly dwelling—the Jerusalem temple—he shows how people can find true significance and value only by being properly focused on Him.

Haggai says the fields are not producing food because the temple has not been rebuilt.

This understanding correlates God’s divine presence with the fertility of the land. The notion of divine control of natural events is common to the ancient world, but Haggai understands that acts of sacrifice or external displays of intrinsic beliefs cannot renew the land; transformative change brought on by the Lord’s presence can.

God wants His people to experience real spiritual changes that are reflected in the ways they interact with each other and the rest of the world.