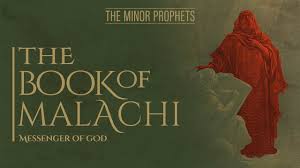 A call to remain faithful to God

The message of Malachi, a prophet

The Book of Malachi is the last of the so-called Minor Prophets and the final book in the Old Testament.

It serves as a fitting conclusion to the collection, for it brings the story of God and Israel to a temporary close with an open question that will be resolved in the coming of John the Baptist and Jesus of Nazareth.

The identity of Malachi has been debated for centuries. Because the name “Malachi” means “My messenger,” it may be understood either as the name of a prophet or as a title. That same title is employed in anticipation of the future coming of “My messenger,” whose arrival prepares the way of the Lord (3:1).

Since Malachi is not mentioned in any other book of the Bible or writing of the ancient Near East, all that is known about him comes from this one book; unfortunately, nothing biographical may be gleaned from it except that the writer and his audience are living in the shadow of a rebuilt temple.

The Poor Behaviors And Attitudes Of GOD’s People

When the Jews returned from exile, they found life back home less than promising. Over time they grew increasingly disheartened by the hardships and injustices they faced; as a result, they began to renege on some of their fundamental promises to God. They may have kept the superficial commitments required by religion, but they violated the spirit and heart of their relationship with God.

He wants to remind Israel of two things:

To drive his message home, Malachi arranges his prose around a series of questions and answers designed both to challenge the poor behaviors and attitudes of God’s people and to vindicate God for how he has chosen to deal with His people.

This form of disputation is found nowhere else in the prophets. The prophet condemns a wide array of sins: offering to God less than the best, marrying outsiders and idol worshipers, divorcing, fornicating, withholding tithes, and oppressing the poor—widows, orphans, and outsiders.

Such sins not only grieve God but threaten the well-being of the nation.

In The Final Verses

Malachi urges his audience to remember the law God gave at Mount Horeb.

Israel’s future—whether it be one of prosperity or adversity—will be tied to how well they keep the directives and rules God commanded. The prophet tells them to look forward to the coming of Elijah before the day of the Eternal arrives.

Moses and Elijah represent the law and prophets, testify to God’s covenant loyalty, and call God’s own to a renewed sense of faithfulness and trust.

God’s message to Judah through Malachi is a double entendre. On one level, God is rebuking people who commit adultery and abandon their spouses. God hates divorce because of its disastrous consequences on lives, families, and communities.

The effects of broken marriages can last a lifetime, even if people fool themselves into thinking otherwise. God stands as the first and most important witness to every marriage contract, and He desires for His people to take those vows seriously.

On another level, however, God is rebuking all of Israel — His bride — who has committed adultery against the Eternal One by abandoning Him to worship other gods. As chronic adulterers, God’s people don’t realize their illicit relationships with pagan goddesses and foreign governments have broken their covenant with Him and are causing them to stray from God’s requirements.

They mix cultic rituals with God’s prescribed rituals, and they genuinely don’t understand why God won’t respond to their prayers, blessings, and sacrifices. Israel demonstrates how people can become insensitive to frequent sin and how that sin can affect their contemporaries and future generations. According to the prophet, naiveté is no excuse for breaking His commands.

These verses simultaneously display retrospective and prospective dimensions of Malachi’s conversation with the people, especially the temple priests, of Jerusalem.

As Ezra in the fifth century B.C. is like Elijah, reflecting these expectations, so John the Baptist is the messenger par excellence 400 years later when he prepares the world for Jesus of Nazareth, God’s Anointed One.