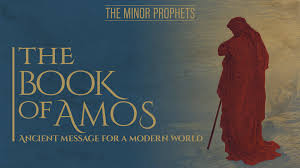 The judgment of God and the call for justice

The message of Amos, the shepherd and orchard worker

Amos insists that he is not a professional prophet. Prophecy is not the family business.

From working the land and tending sheep in peaceful Tekoa, a pastoral village of Judah, he is called to go north and echo God’s voice during the prosperous reign of King Jeroboam II (786–746 B.C.).

Driven From The King’s Shrine

Like other prophets, Amos rails against Israel’s neighboring peoples, such as the Philistines, the Ammonites, and the Edomites. He denounces them for their violent ways and unjust use of power.

But Amos saves his strongest condemnation for God’s own people, his fellow citizens of Judah and Israel, because they rejected the teaching and will of God.

Amos warns Israel that their covenant with God guarantees nothing as long as they continue to violate God’s laws, especially regarding the poor.

He criticizes the shallow prosperity of his day, knowing that often wealth is not the signature of God’s blessing; instead it may be a thin veneer that covers the people’s greed, cheating, and injustice.

So he announces that those addicted to violence will themselves die by the sword, and that the people of Israel will be carried off into exile.

Go Away, Stay Away

He calls for justice and right living before God rather than empty religious ritual, but such faultfinding is always unwelcome in the uneasy alliance of politics and religion.

Therefore, Amos is driven from the king’s shrine in Bethel by Amaziah, the priest in charge, and told never to return again.

The prophet sees something rather ordinary—such as a locust or a plumb line or a basket of ripe fruit—and receives an extraordinary message from God in that moment.

These events are the bases of many of his oracles.

In the visions, he is inspired both to announce God’s message and to plead with God to spare His people from judgment.

God does not tear down simply to tear down: He tears down to build up again. He destroys to restore.

Record Of Visions And Prophecies

Amos may be the first prophet to have his words collected and then written down for future generations, but soon other prophets or disciples of prophets will also record their visions and prophecies so that God’s messages will reach more of God’s people.

We are appalled to hear of horrible atrocities and crimes against humanity. Today we work to put an end to ethnic cleansing and sex trafficking, but these crimes are nothing new.

If we are appalled to hear these stories, imagine how much more God, the Father of all, is angry with those who act in these ways.

Since God’s prophet Amos knows His mind, he will not sit idly by and let the poor and right-living suffer.

Amos looks into the future to a day when God’s judgment will fall on His people. But judgment and destruction are not intended to be the end. The last word belongs to God, and it is a word of mercy on His covenant people.

Sin, of course, must be dealt with; it must be punished decisively.

But in God’s grace, some will survive the onslaught. These survivors the prophets call “the remnant.” They are the ones God destines to be restored and to carry on His name.

Centuries later, the remnant will refound Israel and extend the covenant blessings to every family on the face of the earth.

Most people think they are OK with God; it’s the other fellow who should be worried. Some apparently think that they will fare well in the day of the Eternal One, a day when God will judge sin and defeat His enemies.

Ironically, God’s own people have become His enemies. So Amos warns that the day of the Eternal One will bring a big surprise to those who think they are in good standing with God.

It will be a day of darkness, not light — a day of gloom from which there will be no escape.

Didn’t God institute the festivals? Didn’t He instruct His people to sacrifice? Didn’t He inspire the singers and songwriters to praise His name? Yes.

Even the most beautiful ceremony can become empty ritual, and a sacred time should not be mixed with activities that displease God.

He wants more than pious exercises; He wants His people to follow His instructions, to do what is right, and to honor Him because they recognize that He is the one all-powerful God.

Prophets find God’s message in every word and turn of phrase. Lo-debar and Karnaim were two cities recaptured by Jeroboam II, king of Israel, after a foreign ruler had annexed them as part of his kingdom (2 Kings 10:32–36).

When Jeroboam won back the region, the people celebrated (2 Kings 14:23–29); but Jeroboam was out of step with God, so the joy was short-lived.

That’s where the names of the two cities become interesting. In Hebrew Lo-debar means “no thing”; Karnaim means “horns,” and horns are a symbol of strength.

In a bit of sarcasm, the prophet quips that those who celebrate the retaking of Lo-debar are celebrating “nothing,” while those who claim the victory at Karnaim have only their horn, their own strength, to thank. God will have none of it.

Prophecy has often been described as “speaking truth to power.” Amos predicts the demise of the king, not in some corner somewhere but at the king’s royal shrine at Bethel.

The priest in charge, Amaziah, reports the traitorous words to the king and bans the prophet from ever returning to the religious center of Israel, the Northern Kingdom.

But Amos has the last word. He will not be silent despite the threats against him. The word of God cannot be suppressed by powerful priests or royal decree. Judgment will surely come to the land because the Lord has decided it!

Most of Amos’s prophecy announces doom against Israel, Judah, and her neighbors. But in these last verses, the tone of his prophecy changes. He foresees a day when divine judgment will give way to restoration.

According to the prophet, David’s dynasty will be reinstated and the divided people of God will once again be united.

A glorious age will then arrive when their enemies are defeated, their devastated cities are bustling and thriving again, and their farmers and vintners can’t keep up with the abundance of food and wine.

When that day comes, the people will experience the fruit of God’s salvation.