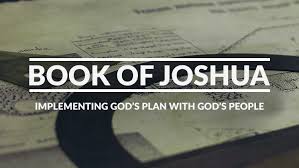 By Joshua, who spied out the land

Some of the most important questions people ask themselves center on identity. Where did I come from? How did I get here? Who are my parents, grandparents, and ancestors? What do these things say about me?

For the Israelites these are important questions too; and some of their formative documents tell of how God chooses them, makes promises to them, and fulfills those promises. These accounts are still important for contemporary believers, even though we live centuries later in very different cultures.

While we may understand God’s promises and fulfillment in a different way today, we are encouraged to believe in God’s faithfulness.

From Slavery To The Promised, Apportioned Land; Full Prophecy And Wisdom

The Book of Joshua fits into the story of God’s people in several important ways. It tells the final part of the story of the exodus from Egypt, which begins when Moses leads the people of Israel out of slavery and back to the land GOD promised Abraham, and the descendants of Abraham. It also tells the story of the conquest of the land when the people of Israel claim the land as their own, the gift from GOD, Who made it promised land. It then describes in (sometimes meticulous) detail how the land is apportioned to each tribe of Israel and how they begin to make their homes in it. Finally the book records the final message Joshua leaves his people, a message full of prophecy and wisdom.

It is unclear who wrote the Book of Joshua. Ancient Jewish tradition suggests that Joshua, the successor to Moses as the leader of Israel, was the author of much of the book. Later traditions imagine that other figures might have been the primary author of Joshua, while some have more recently suggested that the book is the product of several editors compiling stories at several different times. Ancient ideas of authorship were a lot more fluid than those we have now; and whether the book is the product of one person or several, it communicates God’s purpose to us. This book, regardless of who wrote it, is Joshua’s story.

The Book of Joshua divides into three major sections:

Joshua is following in the footsteps of the famous prophet, Moses, who led the lost people of Israel out of Egypt. It is a journey that will lead them where God wants them — in the lands He has long ago promised to the descendants of the patriarch Abraham.

Although mighty people occupy the lands, God tells the Israelites that the land will be theirs, if they only believe. Joshua is reminded often enough of the wanderings in the desert following Moses.

It’s an intimidating thing to follow a legend, but the charge God gives Joshua also gives him what he needs to succeed: Be strong and courageous, and keep the words of God always in front of you. If you do those things, then you can’t go wrong. And if you do those things, God says He will be with you.

Joshua has the promise of God that the Israelites will succeed, and the people have taken to his leadership with enthusiasm. They have begun well, and their faith will keep them strong. But in the conquest story they cannot expect God to do everything.

The story of Rahab reminds us that throughout the history of Israel, unexpected people have stepped to the foreground to be used by God. Rahab is a woman in a male-centered world; and she is a prostitute, the kind of person we typically vilify.

But if she doesn’t rescue these men — and help them escape with the information they have gained — this first campaign in the land of Canaan will fail, and the larger outcome may be complicated — or worse. Her reward is life for herself and those she loves, which tells us that even in a war story like this one, God can be merciful.

Memory is important in the Book of Joshua and in the stories that follow. When the people of Israel remember God’s promises — and His goodness — good things happen. But when they forget, they turn to other things for meaning; they put their trust in other gods — money, power, position, and possessions.

It’s been a problem for the people of God up to the present day, so these attempts to remember can remind us about God’s great works. It has always been true that when God’s people take their eyes off Him, they forget the lessons of the past. We honor God through our worship, and we are reminded of significant lessons learned when we praise Him.

Circumcision — the ritual removal of a male’s foreskin, usually in infancy — is one of the ways God tells His people to distinguish themselves from those around them.

This rite is carried out at this point in the story to reconfirm the Israelites’ identity as God’s people and to prepare them for the greatest celebration that marks them as God’s people — the Passover — which commemorates God bringing them safely out of slavery in Egypt.

The destruction of the city — and the curse Joshua pronounces — are pretty harsh things. Today, of course, there are rules of war, and the international community would punish this kind of military action. But that wasn’t the situation in Canaan.

The Israelites are invaders in the land, badly outnumbered, and their victory and decisive actions send a message to all the other cities and towns: there’s something different — and very dangerous — about these invaders. Moreover, it is essential to purify the land of polytheistic worship before Israel settles in the land with their worship of the Lord.

There’s always an explanation in the Book of Joshua when the people of Israel are defeated in their battles for the promised land, and that explanation is not that God has been unfaithful. It’s the other way around: God tells the people of Israel to do something, and they don’t. God allows their defeats so that they can see the error of their ways. He corrects His people and punishes them so that they may learn to do better.

It’s important to remember who you are and what you’re fighting for. By gathering everyone and reading the law of Moses to them, Joshua unites the people of Israel in their shared past, present, and future and orients them toward God in their new land.

The words from the Lord in Deuteronomy are very clear: Do not make a covenant or show favor with anyone in the land. This instruction, of course, is broken many times by Israel ( Deuteronomy 7:2 ).

God proves that He is greater than any of the local gods — that He is above all other gods — by these cosmic miracles. While today, of course, we know that the earth orbits the sun, not vice versa, the story is clear enough: only an all-powerful God can halt the sun and moon in their courses.

During the furious accounts of battle, it is hard to see how much has been accomplished. But now we pause to reflect on everything that God has made possible — how many kings, states, and cities the people of Israel have defeated with God’s help. We start with those who fell when Moses was leader, and then go on to all those who have fallen since Joshua has been given command.

This second section of the book ( chapters 13–22 ), which details the parceling out of the land of Canaan, makes for slower reading, but it has a distinct literary purpose.

It contains some of the elements we often find in ancient epics such as the catalog of the defeated kings and towns that give the scope of the conquest.

The list also orients us in the larger story of the people of God, since later books of the Bible will set their action here. That means it’s valuable for us to know where the tribes settle and what their lands are like.

The twelve tribes of Israel are spread out all across the country side. Moses has already given some of them land on the east side of the Jordan River, as we read here; but the others are awaiting their land on the west side, in the land of Canaan. Eventually every tribe will have land allotted to them because that has been God’s promise.

This story introduces us to a character who is faithful to his mission even before the events in the Book of Joshua.

Caleb and Joshua were part of the group of spies who were sent into Canaan to observe the natural resources and the defenses of the people, and only they reported honestly that the land was wonderful and that it could be occupied with God’s help ( Numbers 13–14 ).

For Caleb’s faithfulness, he is promised that he will have a place and be given a portion in the promised land.

Women don’t make many appearances in Israel’s story, mostly because women were not given a prominent role in ancient Middle Eastern cultures, but this episode is a startling example of equality and justice: although inheritance usually is passed from father to the oldest son, this family has only daughters.

How will they pass down their land? Well the law of Moses, which has provided for so many things, also provides for this.

The tribe of Levi is the one exception to this process of allocating land because they have been set aside as priests in service to God. The other tribes will have to take care of Levi so that they may do the work God has given them to do for the entire people.

God asks the people to set aside places of sanctuary. This is a violent time, and people often take justice into their own hands. But these cities of refuge are set aside as places where those who have accidentally killed someone might be safe from avenging relatives until a determination of guilt might be made.

In this final section of this book ( chapters 23–24 ), Joshua’s speeches recap the story of their exodus from Egypt, remind the Israelites (and us) that God has been faithful in keeping all His promises, and call the people of Israel to accountability and faithfulness.

It is this last charge that they will fail to keep — and that failure will cause the people of Israel so much trouble in the generations to come.

The Book of Deuteronomy, which precedes Joshua, records Moses giving a similar farewell speech prior to his death. Moses reminded the people of Israel where they had come from and foretold many of the things that later came to pass when they entered into the promised land of Canaan.

Joshua’s speech does the same thing. He reminds the Israelites of their story, and he warns the people of Israel that if they turn from their faith in God they should expect curses instead of the blessings they have experienced.

8 thoughts on “Introduction Of The Book of Joshua – Whose Land? Whose Promise?”