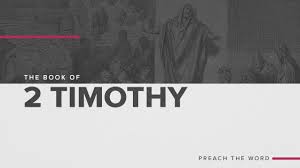 This is probably the last letter Paul ever writes. His tone is different in this letter as he writes from his prison in Rome, not long before dying a martyr’s death. Gone is his typical optimism that he will soon be released; now he is all but certain that he has come to the end of his life.

Yet, while there is an air of acceptance of what is to come, there is also a triumphant tone to this last of the letters from Paul to individuals because Paul will face whatever may come with a clean conscience and a clear sense that he has fulfilled the work God had for him to do.

He has run the race of faith and run it well. He will cross the finish line a winner ready to receive the welcome, the accolades, and the crown from his King, Jesus.

But Paul knows he is not in this race alone. What awaits him is the same victorious destiny that awaits all who love God and long for His kingdom. For Paul, no one longs more and loves greater than Timothy.

In writing to his younger colleague in Ephesus, Paul effectively deputizes him to carry on proclaiming the gospel. As the apostle passes from this world to the next, he wants to be certain that the good news is in good hands.

With Timothy he knows that is the case. Paul encourages Timothy to become a leader and teacher who stands above the pettiness that threatens to tear the church apart. But before the martyr’s blade severs Paul’s head from his body, Paul wants to see Timothy one last time.

So Paul asks Timothy to come to Rome before winter sets in to bring a cloak to keep Paul warm in his prison cell and to collect some books and papers for him.

In this letter, Paul reminds Timothy of his rich spiritual heritage and the need to center his attention on the truth that Paul himself taught. False teachers surround the church, upsetting many and harming the whole community.

Jewish legalists are trying to divide the believers; Gentile pagans are introducing immorality into the church fellowships; Rome is seeking to destroy their leaders. Timothy is Paul’s last and best hope to counter their negative influences.

To protect the church, the young leader must avoid their deceptions, follow Paul’s example, and be ready to pass the faith along to the next generation of faithful witnesses.

Paul singles out several individuals in this letter, some for praise, others for harsh criticism. Timothy is an example of one who stayed true to Jesus and His emissary, the imprisoned Paul.

Later Paul mentions Hymenaeus and Philetus as victims of a cancer within the church who have turned from the truth. Demas, too, is drawn into the attractions of the world, while Alexander the coppersmith opposes their message.

With so many who have abandoned and opposed Paul, it’s refreshing to hear of Onesiphorus, who — against all odds — has stayed true to Paul and often visits him in prison to keep up his spirits. Clearly the message is that many may fall away, but a few will continue to be strong for the Lord.

Paul challenges Timothy to be prepared. Hard times are coming. Things will go from bad to worse, he warns, because pretentious, hostile, hateful, and betraying people are out there.

He tells Timothy to stay away from them and to continue to look to Paul’s example, enduring in love and recalling how Paul himself has followed Jesus.

For if Jesus was persecuted, then what should His followers expect for themselves? In the midst of this warning, Paul encourages Timothy.