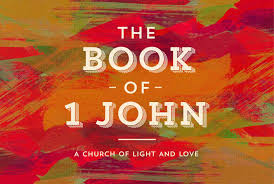 This letter was written by John the emissary, one of Jesus’ earliest followers. Before he became a disciple, John worked as a fisherman with his father Zebedee and his brother James on the Sea of Galilee.

Once he joined Jesus, John became one of Jesus’ closest friends, part of an inner circle within “the twelve” that included Peter, Andrew, and James. But out of all the disciples, it seems that John had the closest relationship with Jesus. He was known as “the disciple loved by Jesus” (John 19:26; 21:7, 20).

John writes this letter from Ephesus, a bustling seaside city whose ruins are now found in Western Turkey. Although 1 John is classified as a letter, it doesn’t have all the elements of a letter written in its day. It has no typical opening or closing. In fact, it is not written to one person or church in particular, but is directed to several different churches made up mainly of non-Jews.

He writes this letter as an old man, after serving in ministry for a very long time. He uses a tender, fatherly tone toward people he views as his spiritual “little children”—the new generation of Christians who have not seen Jesus with their own eyes as John did.

John begins this letter much as he does his Gospel. In both writings, he opens by stressing the eternal nature of Jesus. He explains how Jesus was with the Father from the beginning, before the creation of the world and before He was revealed to the world in human flesh. John then describes God as light and encourages believers to walk in the light by stepping away from the darkness of sin.

Like other New Testament writers, he also warns believers to beware of false teachers who deny the true identity of Jesus. But most of all, John focuses on love—how God lavishes His love on His children and how they are to do the same to one another.

The love of God must overwhelm the believer’s desire for the material things of this life. John goes so far as to say, “Don’t fall in love with this corrupt world or worship the things it can offer. Those who love its corrupt ways don’t have the Father’s love living within them” (2:15).

The word “sin” has virtually disappeared from modern conversation. Afraid of sounding judgmental, we call sin something else — a mistake, an addiction, a tendency, a bad decision — and ignore it as normal and natural behavior.

But John is calling the church to a radical holiness where those in the church will regularly remember their sins and seek God’s forgiveness. Each sin, small and large, injures us or someone else; it imprints on our soul, makes us imperfect, and separates us from the perfect God. If we confess our sins to God each day, then He will purify our hearts and draw us closer to Him.

John is affectionately addressing this letter to his “little children,” and he is writing to help them avoid sin and the pain and guilt that come with it. The glamour of decadent lifestyles devoid of God is often advertised as the epitome of joy and freedom.

But what are often conveniently left out of these portrayals are the agonizing consequences of such destructive lifestyles. Meaningful pleasure comes not when we are enslaved by the empty promises of the world, but when we are living in loving obedience to God.

When we feel like we are not good enough to be loved by God, we should remember that God’s love is greater than our doubts. We must silence the sounds of condemnation so we can hear the voice of God’s loving assurance and remember that He has selected us to be part of His family.

How can the words of prophets be tested to discover the truth?

The most important question is whether they acknowledge that Jesus is fully God and fully human. In the first century, many people were so convinced that this material world was corrupt and evil that they couldn’t imagine how a perfect God could wrap Himself in imperfect skin.

Many today still function as if the physical world is a bad thing; this understanding is demonstrated when they downplay the hope of bodily resurrection and emphasize the heavenly destination of souls. Implicitly, this belittles Jesus’ own incarnation and resurrection.

On the other hand, many people accept Jesus’ humanity but deny His divinity. He may have been a great teacher, they say, but certainly not the incarnation of God.

However, Jesus made bold claims about who He was and what He came to do. These are not the things a great teacher would have said or done if they had not been true. It is fair to say that no other life has drawn so much scrutiny, and no other life has ever elicited such praise.

While it might seem to be easier to go off and live in isolation rather than put up with those we are not naturally attracted to, there are responsibilities that come with living in a spiritual family. We reflect our worship of God by living in respect with our Christian brothers and sisters. How we treat the people around us on a daily basis is the real test of our love for God.

John’s final bit of pastoral advice sounds an alarm against idolatry. If we look carefully at our culture and into our own hearts, we will find we are ultimately concerned about ourselves, our entertainment, our comforts, and our wallets.

None of these are worthy of our highest devotion; but we put more time, energy, money, and emotion into these than we do into the one true God. So John’s warning should be heeded: watch out for the steady impulse to love other things more than God.