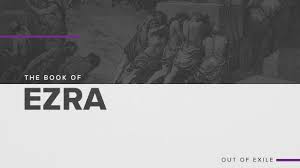 The Jews return to the land of promise

By Ezra, the priest

The Book of Ezra picks up where 2 Chronicles leaves off and continues the dramatic story of God’s dealings with His displaced people.

In the Hebrew Bible, Ezra and Nehemiah are one book entitled Ezra-Nehemiah; but the Christian canon separates them into two different books located together toward the end of the historical books and before the great books of wisdom and poetry.

According to tradition, Ezra is the author of this book as it stands, and there are parts of it (7:28–9:15) that appear to be his memoirs. However, the book is anonymous; and as with most things ancient, it is difficult to say for certain who is responsible for its final form.

If His People Will Only Commit, GOD Is Ready To Bless

The story behind Ezra and Nehemiah involves a gracious God who is ready to give His people another opportunity to follow Him. He hears their cries from foreign soils and answers them by making a way for the exiles to rebuild their nation, their lives, and their connection with Him.

As the true force behind history, the one true God inspires a series of Persian kings not only to allow the exiles safe passage home but to support them financially.

To assist them further, God raises up a number of great leaders—such as Zerubbabel, Jeshua the high priest, Nehemiah, and Ezra—from their own community to direct the Jews once they are back in their homeland.

Now, if His people will only commit themselves to following Him, God is ready to bless their efforts and raise His nation from its ruined foundations.

One of the first tasks the former exiles attempt is to rebuild the temple, a project completed—despite a great many setbacks and much opposition—in 515 B.C. under the leadership of Zerubbabel and Jeshua.

Ezra, a priest and scribe with impressive credentials, returns to his ancestral lands in 458 B.C. to find a nation in peril because the people have forgotten God’s instructions contained in Scripture. So Ezra guides the nation to rediscover who they are and to return to Scripture, particularly the five books of Moses called the Torah.

Like many of the prophets and priests of his day, Ezra is concerned that his people follow God’s covenantal obligations so that they will not face another national disaster.

Answering To A New Name

The exile experience has changed God’s people in profound ways; they even answer to a new name. Prior to the exile, they are known as “the nation of Judah” or “Judahites.” But after the Babylonian conquest and their long season of exile, the world now knows them as “Jews.”

By returning the temple treasures to Jerusalem, Cyrus recognizes and supports the development of the Jews’ renewed government while maintaining governmental control over the nation.

The Jewish leaders are careful that the right people return to the right places so that the new nation resembles the nation under the great kings David, Solomon, Jehoshaphat, Hezekiah, and Josiah.

Just as the Southern Kingdom’s kings made the restoration of proper worship the priority of their reforms during the monarchy, the reconstruction of the altar is the first order of business when the Jews return to Jerusalem. But they cannot be overzealous in their rebuilding.

The few Israelites who have remained in the land while most of the population was exiled revere the site of the destroyed temple as holy. To immediately build the temple on the old foundations could be considered apostasy, so the Jews proceed in their reforms with caution. They don’t want to incur the wrath of God or of their new neighbors.

The elders recognize that the Assyrian colonists have impure motives. They don’t want to help the Jews; they want to inhibit the reconstruction of the nation. But foreigners aren’t the only ones interested in hindering the progress.

Those people who remained in the Southern Kingdom while the Jews were exiled try many times to disrupt Israel’s tender alliance with the Persian emperors. The Jews have to fight to rebuild the temple during the reigns of Cyrus and Darius, and decades later they will fight to rebuild Jerusalem.

The Jews cannot imagine that such opposition to their rebuilding exists within the very government sanctioning and financing their work. The support of a pagan government is not enough to enable and maintain the building of the Lord’s temple.

While Darius struggles with political unrest throughout his empire, God incites the prophets Haggai and Zechariah to motivate the Jews to resume work on the building.

Which foreign nation led the empire was of no consequence to Him; He could use their power whenever and however He liked. But God uses kings Cyrus and Darius in a different way — He uses them to restore the Jews. They have much to celebrate!

From the beginning, Ezra has influence. As a descendant of Aaron, he is of the highest and most respected priestly class in the Jewish community, so his own people will follow him.

Even in the Persian Empire, his status as a priest makes him a valued political figure. These qualifications make him the perfect person to revitalize the waning religious reforms started by the first Jewish exiles who have returned to Jerusalem.

If Ezra expects to retain the support of the Persian king, he has to obey Artaxerxes’ four commands. Within five months, Ezra completes the first two demands — he leads the Jews to Jerusalem, and he delivers all the offerings to the temple.

His obedience to Artaxerxes is matched by the governors’ obedience: they agree to support financially the Jews’ efforts at reestablishing their nation. Now that Ezra has addressed the religious situation in Jerusalem, he can tend to the legal situation as Artaxerxes requested.

Ezra still needs to investigate how the Jews are practicing the law and appoint judges and teachers for the nation.

The law does not forbid foreign marriages to keep bloodlines pure; it forbids them for religious reasons. David’s own ancestor, Ruth, was a Moabite. This marriage was blessed because Ruth converted to the religion of Israel and was no longer considered an outsider by God.

The great King Solomon was influenced by his Egyptian bride; Ahab (of the Northern Kingdom) completely dissociated himself from God in favor of his wife, Jezebel, and her gods. Such marriages tend to lead God’s followers away from His path — and that is the real tragedy.

Ezra is able to fulfill all of Artaxerxes’ requirements and ensure his support. He leads the inquiry into the Jews’ practice of God’s laws, and he selects tribal leaders as judges over their people.

This story of the legal system may seem unimportant when compared to the sweeping cultic reforms of Josiah and Hezekiah, but it is a microcosm of Ezra’s work throughout Jerusalem and Judah. Throughout his reforms, Ezra focuses on God and takes deliberate steps to improve the nation’s relationship with Him.