Love Shriners Organization is Shriners Hospitals for Children, which is a network of 22 non-profit medical facilities across North America.

are eligible for care and receive all services in a family-centered environment, regardless of the patients’ ability to pay. Care for children is usually provided until age 18, although in some cases, it may be extended to age 21.

Headquartered in Tampa, Florida, a major city on the Gulf Coast of the U.S. state of Florida.

The hospitals are owned and operated by Shriners International, also commonly known as the Shriners and formerly known as the Ancient Arabic Order of the Nobles of the Mystic Shrine, a Freemasonry-related organization, a fraternity or fraternal organization, society, club or fraternal order traditionally of men associated together for various religious or secular aims.

Fraternity in the Western concept developed in the Christian context, notably with the religious orders in the Catholic Church during the Middle Ages, whose members are known as Shriners. Patients are not required to have any familial affiliation with the Shriners order nor Freemasonry.

The current advertising campaign for the healthcare system features the tagline, “Love to the Rescue.”

Imperial Session of the Shriners

In 1920, the Imperial Session of the Shriners was held in Portland, Oregon. A city of regional importance to the Pacific Northwest and the largest and most populous city in the U.S. state of Oregon. During that session the membership unanimously passed a resolution put forward by W. Freeland Kendrick who (while serving as Imperial Potentate) put forth the resolution that created the Shriners Hospitals for Children.

The first hospital in the system opened in 1922 in Shreveport, Louisiana. The third most populous city in Louisiana after Baton Rouge. It provided pediatric orthopedic care. the branch of medicine that involves the medical care of infants, children, and adolescents combined with the branch of surgery concerned with conditions involving the musculoskeletal system.

Shriners Hospitals for Children worked closely with the United States Southern Command, located in Doral, Florida in Greater Miami, is one of the eleven unified combatant commands in the United States Department of Defense and other military commands, including the Army and Air Force, the Guatemalan combined military force and via the U.S. embassy, the U.S. Department of Health & Human Services, and the U.S. State Department to arrange medical visas and transportation to the United States, with a global commitment to children around the world.

In 1962, the Shriners of North America allocated $10 million to establish three hospitals that specialized in the treatment and rehabilitation of burned children. After visiting 21 university-based medical institutions, the decision was made to build their first pediatric burn hospital on the campus of the University of Texas Medical Branch in Galveston, Texas.

In 1994, the Chronicle of Philanthropy, a magazine that covers the nonprofit world of philanthropy, Based in Washington, DC. The industry publication, released the results of the largest study of charitable and non-profit organization popularity and credibility.

In September 2008, the Shriner’s Hospital in Galveston sustained significant damage from Hurricane Ike. The hospital was closed for renovation at that time, and care for children with acute burns was provided at other Shriners Hospitals for Children.

The Shriners had considered closing facilities in Shreveport, Louisiana; Greenville, South Carolina; Erie, Pennsylvania; Spokane, Washington; Springfield, Massachusetts and Galveston, Texas, eliminating a total of 225 beds. However, in July 2009, the Shriners National Convention voted overwhelmingly against closing any hospitals and to repair and reopen the Galveston facility.

In 2009, despite an endowment that declined from $8 billion to $5 billion in less than a year because of the poor economy, Douglas Maxwell, the hospitals’ CEO said he and other Shriners are confident the hospital system will be able to remain solvent in the long term.

Maxwell stated in July 2009 that some of the facilities may become outpatient surgical centers, and will begin accepting insurance payments (for most care) for the first time in the hospitals’ 87-year history. Maxwell said children suffering from burns, orthopedic conditions, spinal cord injuries and cleft palates will continue to be treated without charge to their families.

In May 2015, Shriners Hospitals for Children became a member of the Mayo Clinic Care Network, a national network of organizations committed to better serving patients and their families through physician collaboration.

Treatment areas cover a wide range of pediatric orthopedics, including:

and other neurological conditions that affect ambulation and movement.

Three of the hospitals provide spinal cord injury rehabilitation that is developmentally appropriate for children and adolescents, with adventure and adapted sports programs, activity-based rehabilitation, aqua therapy, animal-assisted therapy, and other programs.

Four of the hospitals (Boston, Galveston, Cincinnati, and Sacramento) provide care for children with burns, as well as treating a variety of skin conditions such as epidermolysis bullosa and toxic epidermal necrolysis. The Boston, Chicago, Shreveport, and Portland hospitals also provide treatment for children with craniofacial conditions, especially facial clefts. 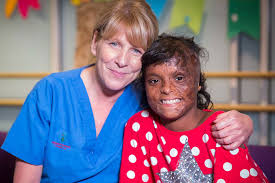 The hospital in Sacramento is the only hospital in the Shriners’ system that focuses on all three areas of treatment (burns, orthopedics, and spinal cord injuries), as well as research. The Sacramento hospital also houses its own orthotics and prosthetics lab and development facilities.

Transportation to the hospitals is often provided free of charge for patients and their family by Shriner-drivers (also known as Hospital Tripsters) across the country, by van or by airplane. Children accepted for treatment become part of the Shriners Hospital system until their 18th or, sometimes, their 21st, birthday, eligible for both inpatient and outpatient treatment for all facets of their disability.

While the main emphasis of the hospitals is to provide medical care to children regardless of the family’s ability to pay, the mission of the hospitals also includes research on the conditions treated and the education of medical professionals, including medical residents and fellows, nurses, physical, recreation, and occupational therapists, speech and language pathology, psychologists, social workers, and child life specialists.